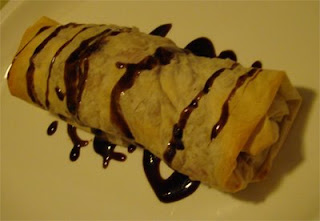 This recipe was posted on Vegan.com’s Top Ten Vegan Recipes of 2008 list (a little presumptuous, no? considering 2008 is only half over, but whatever.) I made the Moroccan Phyllo Rolls, which as M said, were “the most exciting thing to come out of this kitchen all year.” They were so exciting I made them again for a dinner party I hosted. I didn’t have all of the ingredients on hand, but the recipe really lends itself to some adulteration. I did not have zucchini or fennel bulb (I’ve never even seen this, but I may have to hunt it down to do this recipe up proper someday), but one thing I added that was a really nice addition is the oft-ignored, but pleasing to the palate, butter bean. The accompanying Balsamic Maple sauce, was a perfect mixture of tangy and sweet, but in the future I will cut the arrowroot powder down to half, as it was just a little too congealed for my liking, but I absolutely recommend making it the first time with the original measurements, as this may just be a personal preference. 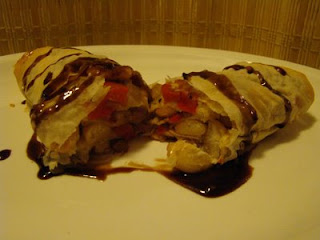