There was some argument regarding these cupcakes in my household, as Mike wanted vanilla, and my need for peanut butter and chocolate was just beginning to rear its head. The compromise was that I made vanilla cupcakes and took out some of the batter and mixed chocolate into one section and peanut butter into the other. Then I spooned some of each onto each cupcake. In the future, I will keep some extra vanilla aside to spoon on top of the chocolate and peanut butter dollops, to enclose them as a surprise. The icing was a confectioners sugar/soy milk glaze. 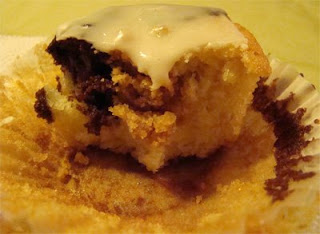 The cookies are Peanut Butter Bombs from the dessert book My Sweet Vegan. The first recipe I made from this book (a cheesecake) was a complete disaster, but I decided to give it a second chance and given my recent need for peanut butter and chocolate this recipe caught my eye. It has three different kinds of sugar (confectioners, white, and brown), and a lot of it and aside from the cocoa powder and peanut butter, not much else. The cookies were really good, especially when they were still warm out of the oven. So the cookbook has won me back for now, I’ll have to try out a few more things before I give my final verdict on it. 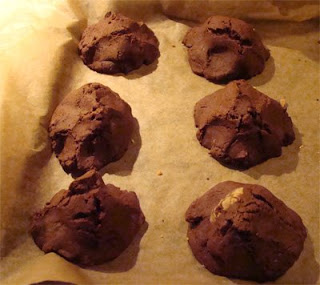 a close up of the inside: 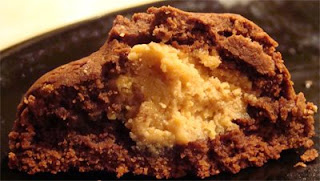 Sadly, not pictured are the chocolate cupcakes with peanut butter frosting I made for a friend’s BBQ. I was on a rampage, but now it’s safe to say that my pb&c sweet tooth has been satiated.