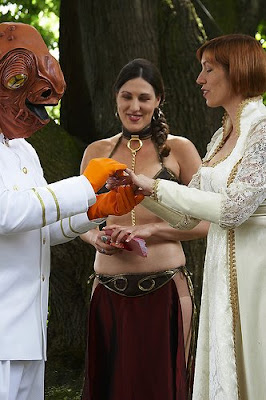 I don’t like Star Wars anymore.  I never thought I’d say it.  As a kid, I worshipped Lucas’ universe and used my imagination to fill in the gaps in the story and compile worlds beyond those shown in the films.  After years of relatively tight protection of the integrity of the series (okay, I’m pretending I didn’t see the christmas special or the Ewok movies), there is basically a deluge of crappiness.  Nothing good has come of three worthless, poorly conceived films and the animated drivel that’s now piled on.  Blah.  I just plain don’t care to watch any of it.  I don’t care to fill in the gaps.  I just don’t care.  Still, these people are funny.  They care…