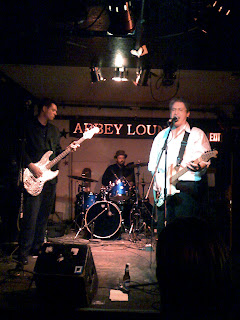 On a rainy Saturday earlier in the month, I ventured out to the Abbey Lounge (which, unknown to me at the time, was in a dire state) to see one Boston’s most original bands, The In Out. Having been around for 16 years and having had numerous line up changes, the band is mostly the brain-child of Todd Nudelman whose songs range from describing random events, odes to influences, and sometimes, food. Long time member Nick Blakey (who used to be featured on drums for many year) handles the bass duties and Richard Adkins on the drums.