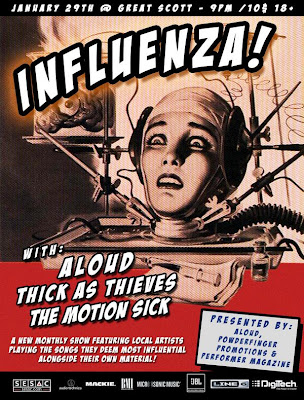 Solution:Influenza, hosted by Aloud, Powderfinger Promotions, and Northeast Performer Magazine!! Bands play one hour showcase sets of 1/2 originals, 1/2 covers of songs that have influenced them over the years. Come check out your favorite bands showing off some of the bands who have been most influential to them over the years, coupled with their own great music.

Most exciting for us is that each of the band members will be singing lead vocals on a song!

Our seven covers are:
1. The first song Matt ever learned to play on bass.
2. A song about the fleeting nature of living embodied with spirit of Anne Frank.
3. A song about infidelity, pride, and execution.
4. A frenetic, wild song pondering the truthfulness of statements made by a loved one.
5. A song discouraging the use of wild Spring Break behavior as a method for getting over a breakup…and water skiing.
6. A song by a recent Superbowl performer who did not have a wardrobe malfunction as far as we know, though we’re trying to work one into our version of the song.
7. The biggest song by a band that wasn’t quite big yet, but became a bigger band after they went through a vocal transition of sorts.