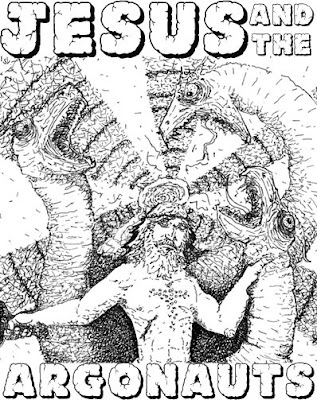 Sometime in early 2001, I wrote a song called “Love Conquers All.”  At the time, I was performing, mostly solo, under the moniker Boys Suck.  Among the very cool and flattering things that happened back in those days was the coordination of a Boys Suck tribute album by Dead Puppy Records’ Terry Rice – http://www.deadpuppyrecords.com/sucktribs.html – now out of print.  Interestingly, on this compilation, I elected to perform a version of Blitzkriegbliss‘ unreleased song “Jean-Paul Approximately,” which has now been recorded (and very often performed) by The Motion Sick as “Jean-Paul.” Among the best of the tracks on the tribute album is the band Jesus and the Argonauts’ rousing gang-vocal rendition of “Love Conquers All” (MP3). JatA captured the spirit of the song and made it work in a great way that extended beyond my capabilities as a solo performer.

We now fast-forward 6 or 7 years to the present.  Temporary West-Coaster Debcha of the famous and fabulous Zed=Zee blog is in town and suggests attending the Jesus and the Argonauts show at Sally O’Brien’s.  Sounds good to me!  So, we head on down to check out the band.  I hadn’t seen these guys in many years.  Heck, I wasn’t even sure if they’d remember who I was.  Well, not only did they remember, but at the end of the night, I learned that they had been sometimes performing “Love Conquers All” ever since they recorded the cover of it.  So, they invite a bunch of us on stage to join in.  I didn’t really remember the words to the song, so I was a little scared to be involved, but it was a fun and awesome time and it was really nice to see that the song still is still alive.  They totally handled it exactly as intended: as a sort of drunken, goofy, tongue-in-cheek hypergloomy number.