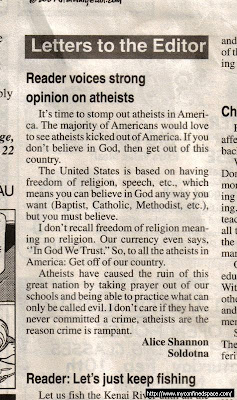 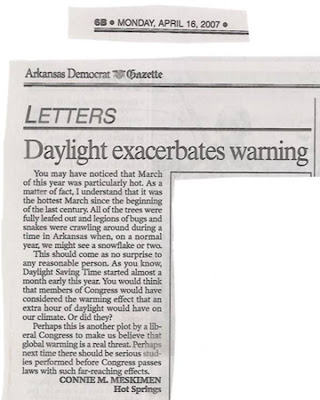 One of the great things about the World Wide Web is that these things circulate as truth. It’s hard for me to know if these opinion letters are written as jokes, fabricated by the papers in question, or even possibly never published, but rather are forged to look authentic. Regardless of authenticity, validity, or absurdity, they are good for a laugh. I won’t express my opinion on either as sometimes no statement is the greatest statement of all.

Around 2000, I had intended to develop a web site called “The Information Age,” which would contain articles with factual errors, omissions, and blatant lies. My intention was to (perhaps with a glimmer or two of mischief) bring attention to the growing tendency by the general public, oh and the media, to accept information published on the web as accurate, regardless of its source. Although I never did get the site off the ground, others have achieved my goals with greater finesse, though within a far smaller scope, than I might have. One fine example is this web site summarizing _Lord of the Rings_ and providing “help” with homework essays on the text: http://flyingmoose.org/tolksarc/homework.htm

In fact, this site was so helpful that The London Times (http://flyingmoose.org/tolksarc/blanchett.htm) saw fit to source much information from it when developing an article centered around Cate Blanchett’s role in the film versions. If we believe this web site’s account (I’ve not seen the actual article), the Times article printed: “For the uninitiated, Galadriel is the good sister of the evil but beautiful Queen Beruthiel, who imprisons the Fellowship of the Ring in the forest of Lothlorien. In the book, Galadriel frees them from her sister’s clutches. It’s a small but memorable part, and Blanchett lobbied hard for it. “

For the uninitiated, like the author of the Time article, Galadriel’s “sister” does not exist in the books nor movies. What is somewhat nefarious about the web site is that the information is outrageous for those familiar with the text, but realistic enough to be believed if one just thumbed through the book. In fact, Queen Berúthiel (http://en.wikipedia.org/wiki/Beruthiel) is the name of a Tolkien character.