Well, I can only sum this one up as “adventure.” It was definitely a night for the memoirs.

We drove for over 8 hours to get down to Houston. It was a pretty brutal journey this far into the trip. We arrived at Boondocks. It was a nice place with a jukebox full of quality tunes. The show was supposed to start at 10, but didn’t roll on until about 11. We chatted with the staff and locals, who seemed nice and all.

Trouble began when someone at the place put a hole in the bathroom wall. I guess we were the only outsiders there (it was mostly regulars) and we were certainly a little worn down from travel and not all of us were at our best friendliness. So, immediately, we were the suspects for causing the damage. I didn’t know about this (or the damage at all) until after we played, but this suspicion arose some time early in the night. I don’t think the venue hosts music too frequently, so it’s sort of in a trial stage, which didn’t help our situation much.

Anyway, we played pretty well to a small crowd. They were quite enthusiastic and during our last song “Jean-Paul,” Patrick smashed his guitar. He hadn’t broken any gear in quite a while. Anyway, he smashed the guitar on the bar, which was next to the stage. I didn’t really see it happening because I was busy singing, but I guess maybe he hit the guitar on the bar twice and put a couple of dents in it. I wish I took a picture, but I only have my visual memory of it. The dents were not really severe, but the thing is, this place was pretty spotless. Someone told us that the bar was opened recently, so I guess it hasn’t even had beer spills yet. So, most places that we’ve been, a couple of dents on the bar is pretty much par for the course (not that we go on a bar-denting rampage), but since everything here was new, it was very upsetting to the owner. I think the smashing of the guitar on the bar couple with the hole in the bathroom wall that had already been attributed to us (falsely) resulted in some serious anger. I don’t totally blame the guy and I definitely see where he was coming from. We really aren’t the kind of band that goes around breaking things and banging up venues.

Anyway, he came up right after we finished and told us to “get the fuck out of there.” I didn’t even realize immediately what the issue was because I didn’t really totally see the smashing and didn’t know anything about damage of any kind. I tried to talk to him about it and told him that I would take care of any damage that we caused (which I meant sincerely) and he calmed down enough to just demand that Patrick needed to be immediately ejected. Pat was selling CDs and shirts to a bunch of people and I told him that he better get out so we don’t have any trouble and I took over the merch. The bouncer calmly escorted Patrick out of the bar. Pat asked the owner what he could do to resolve the situation and was just told that he had to leave, so he didn’t argue too much and just left.

I talked to the owner for a while and he was very visibly upset, which made me feel pretty awful and upset. I offered to let him put a charge on my credit card to pay for the bar damages and we settled that. I haven’t heard anything on the final amount, but I guess I trust him to be fair. I don’t know what else I can do about it.

Anyway, I feel pretty horrible about leaving a venue under those circumstances. The band that we played with, Antarctica Starts Here, gave us their cut of the money for the night (thanks!) because, as you all might imagine, I wasn’t about to request the agreed payout for the night. Anyway, that was generous of those guys.

So, as we packed up and left, the owner kept a close eye on us. I imagine he was concerned we might cause damage on the way out. Anyone who knows any of us can attest to the fact that we’d never purposely damage anything of anyone else’s. Pat got caught up in the passion of the music and broke his guitar and he certainly didn’t mean to harm the venue in any way.

In the end, it was kind of a depressing night and it still lingers over my head as it’s not resolved yet. I kind of hope the owner feels a bit better about the situation today and that we work out the financial matters so that he is happy.

The truth is, though, that he is going to experience a lot of similar things if he’s trying to host rock music and keep the place pristine. I guess the bar is really more of a bar than a rock club and maybe it should remain as such…

As you all might have concluded, we’re not welcome back…Still, even with just the smattering of people at the show, we got multiple offers for future shows and such, so I guess we did all right if the city of Houston will ever take us back…only the giant statue of Sam Houston will reveal the answer… 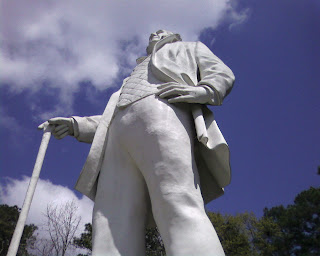 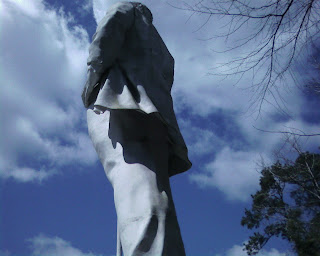