We arrived in Oklahoma and stopped at the visitors center. Patrick struck up a conversation with the women working there and they pulled out the Tulsa World newspaper and it turned out that our show was the “pick” show of the day. We also discovered that the Boston-band Neptune was playing with us at this show as well. There was a whole lead article on bands passing through Tulsa on the way to SXSW. Our logo was on the cover of the entertainment magazine that is part of the weekend edition of the newspaper. You can see a small piece of the cover here: 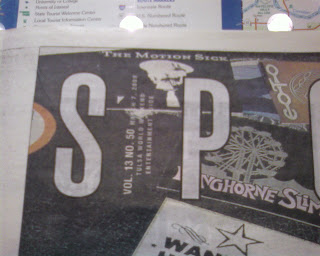 In OK, we discovered an exciting approach to tolls. When you get on the highway, you pay the full toll for the road until the end. If you get off the highway before the end, they give you money back. Crazy!

We stopped at “Kum N Go” for gas and found that they had 100 oz. soda mugs…the first fill is free with purchase: 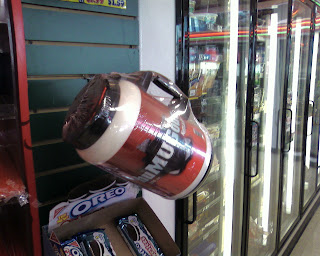 We got down to the venue and it was a pretty awesome place. It’s not quite shaped the best for music, but it had a crazy biking decor and the people at the venue were very friendly (and there were a lot of hipsters). We wandered off for a tour of Tulsa. Apparently, Tulsa has one of the highest concentrations of art-deco buildings in the US. The city was pretty empty except for swarms of people going to see Annie. We wandered around and pretended to make a zombie movie in the empty city.

We got to cross the “Martin Luther King Jr. Memorial Overpass.” I thought, wow, they must not have cared too much for MLK if they built him a memorial overpass…that is a pretty crappy tribute. Also, it wasn’t a very nice overpass.

We ended up eating at some pub with 7 million beers or something. I had sweet potato fries, which was a serious mistake. I’ve not had any greasy or heavy food since we left and eating the fries put a brick in my stomach that hasn’t yet left, even the next morning. I guess normally I am used to eating disgusting food or something.

We went back to the venue and set up to play around 1030. It was pretty dead, but a handful of really cool people made the show for us. We had fun playing. Travis broke his sticks during Grace Kelly and started playing with his hands. I hopped up on his drums and almost toppled forward through the glass window behind him, but he gave me enough of a push to regain my balance. It was a scary moment, but all is well…

After we played, The Silent Years (who we played with in Springfield) rocked the place. I really like their music. I have no idea how to describe it, but it’s good stuff and they are nice people. We hope to meet up with them down in Austin.

Finally, Neptune set up their crazy assortment of forged metal instrumentation. They played a crazy sort of noise rock and it was pretty awesome. It was too loud for me to get close enough to see beyond the bunch of people gathered around them, so I didn’t really get the visuals associated with the sonic assault. I will have to check them out again in Boston. An audience member decided to remove a tree from a pot during their set and put it in his pants. It was a fairly amusing sight and definitely made a pretty heavy mess of the place.

Kate was kind enough to let us crash at her place. As we walked in and I heard Neutral Milk Hotel playing, I knew we were in good hands…