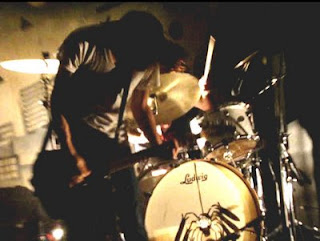 It is not often that I find music, especially entire albums, that I really like. I am super picky about what music is for. But when I do find something I love, I’m pretty die-hard about it. Though there have been a few albums here and there these past few years that have really gotten my attention (Neon Bible, We Were Dead Before the Ship Even Sank), I haven’t been this excited about a new band in a long while. I should preface this with a list of things I respond to when experiencing music: I need songs (and they have to be songs, and by that I mean, structured-in a way- and have lyrics at the forefront) to be passionate, moody, expressive, a bit dark, edgy, and I need to get a sense that something is being said.

Dead Confederate satisfies all of the desires I have of a band. I find myself listening to their EP (Full-length LP is due in September) just about every time I turn my MP3 player on. It is full of builds and swells, dropping into quiet reflective moments and then bashing away until there is a sense of resolution. Every song is its own brooding story, yet they all pull together into a cohesive little album.

Live the band is explosive (clichéd term? Maybe, but it is true). From the first note of the first song I knew I was seeing something special. Two blue-white lights backlit the band and made it seem like they were stepping out from the beyond, caught somewhere between the ether and the dirty floor of the club. Each band mate is seemingly working away on their own, interested in playing what they like, moving and responding to the music in their own way (the keyboardist, for instance, spins and bops and makes hilarious faces, while the drummer thrashes his drums to pieces, the singer swishes his dark hair around and rocks to and fro, the guitarist, who incidentally has an adorable kitten t-shirt on, moves his knees to the beat, and the bass player is mostly still but I get the feeling that he is the one holding the lid on). They are disparate parts working in unison, and yet somehow they seem to share a pulse. Sonically the band was really tight, creating lush arrangements that were grizzly and pounding depending on the moment.

In addition (and as evidenced in the video interview The Sleepwalker and I conducted) the band is a group of really sweet, funny guys. I know they are headed for big things.