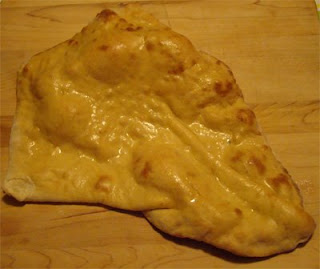 Tonight, I tackled Naan. I bought the mad expensive Chipati flour weeks ago at the Indian Grocery, and finally now have come around to using it. I followed a random recipe from somewhere in webspace and replaced the yogurt with soy yogurt (stupid whole foods only had vanilla soy yogurt, so I had to use that, luckily I couldn’t taste the vanilla in the finished naan) and the ghee with soy margarine. I read somewhere that you can jack up the oven to 500 degrees and use a pizza stone to recreate the characteristics of the tandori clay oven, and that actually worked pretty well. 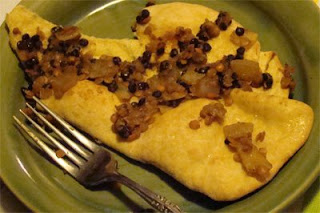 I could barely slow down the scarfing to take a picture, so here is my half eaten naan with lentils! The lentils I threw together quickly, as I was mostly concentrating on the naan. Basically, it was red lentils, black beluga lentils, onion, garam masala, garlic, fenugreek, tumeric, simmered in a cast iron pan while adding 1/2 a cup of water at a time to get the lentils to soften.