After 2 days of nothing but driving and no real eventful stuff, we finally were in Austin. Dave and Andre of Same Sky Studio were very kind and let us crash at their place and eat their food, drink their drinks, wear their clothes, and most importantly, use their wireless.

We woke up not too early – about 10 AM – after hitting the hay at about 5 AM. We casually got ready and rolled out about 12:30. We drove toward the UPS store, which we needed to hit to pick up our t-shirts that I had gotten shipped to Austin by the company that screened them, Contagious Graphics. Those guys always do a nice job. As we headed in, we saw the massive famed Whole Foods store, where we had a varied set of motives for visiting. I wanted to get some reasonable quick food, Matt wanted a coffee, Pat wanted to do some field research on cheese prices, and Travis wanted to hate yet another Whole Foods location. The store was horrible and overwhelming. Swarms of people milling about in a confusing maze layout. I could barely find anything I wanted, but I got a couple of tangelos and some kind of iffy vegan chicken salad. They actually had bands playing in their quasi-outdoor eating area for SXSW. We had to use our phones to locate everyone in the confusing mess and Patrick was very unimpressed by the cheese displays, prices, and selection.

Next, we drove on down to the UPS store. We haven’t been horribly, hopelessly lost yet on this trip, but the times when the GPS would have saved us a lot of lost time have been numerous. We arrive at the UPS store. I say I am picking up a package. The clerk asks if I have a box there. I say no. He says they don’t hold packages for people without boxes and gives me the local UPS depot number. I call to track the package and after saying the tracking number 4 times into the phone, I am informed by the automated system’s voice that the package has been refused by recipient and returned to sender. So, no shirts. At first, I felt like this should make me pretty angry, but I didn’t really care. So, no big deal. More space in the van.

Now, we head on over to the Green Light Go / Hard Pressed Publicity party at Fran’s Hamburgers. I am a little nervous about how it will go because we are not quite sure how many of us can manage to play and what we will be playing, but I figure it should be all right in the end. We planned to get there early to help out with sound setup and coordinating anything we could. As always, it was wonderful to see Janelle and Heather from Green Light Go and I got at least some time to speak to both. I had offered to take video of as many party performances as possible using both cameras that I have with me. Heather took on the video camera duties and I took some photos and some extra video on the digital camera.

The party was excellent because we got to see some of our friends (Static of the Gods – doing a great 2/3rds band stripped-down set and Golden Bloom being awesome as always). We enjoyed the new bands we had not previously heard. Our new buddies from Televandals also made their way to the show to give the good old Boston support.

After the last act began, we basically had to jet down to Houston to play another show at Notsuoh. We were supposed to arrive at about 9:30 and open the show, with a local Houston act playing after us. We ended up leaving a bit late and getting about an hour lost, arriving closer to 11. So, the band that was playing after us, played before us. As we arrived, they were wrapping and their whole crowd streamed out of the place. We started playing and the band before stuck around for 2 or 3 songs, but then we played to about 5 or 6 people. I was really distracted by a phone call I had just received from my wife Sophia about how our bathtub handle was broken and water was coming out. I think I thought the flow of water was worse than it was. I tried to get her to turn off a water valve, but it wasn’t happening. We were both stressed out about. So, when we arrived late and everyone left, I was pretty badly frazzled and fumbled a lot of lyrics, but no big deal I suppose.

The owner of the place was really awesome and gave us some gas money and told us about the place, which is a great room. It’s an old entrance to a department store. There are tons of old things laying around – shoe displays, books, junk, contraptions, and gadgets. It was one of my favorite rooms to just take in. I think the place would be great to play if things didn’t go sort of wrong with getting there. For the 2nd year now, Houston has defeated us. Definitely go and check out Notsuoh if you live there. Say hi for us please.

We made the 3+ hour drive back to Austin and collapsed onto the floor close to 5 AM.

Lots more photos coming when the Internet is good… 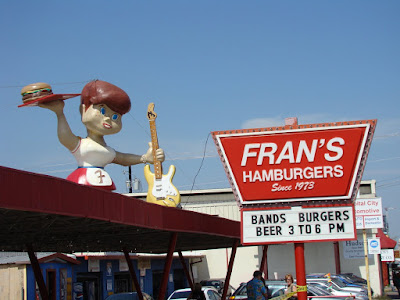 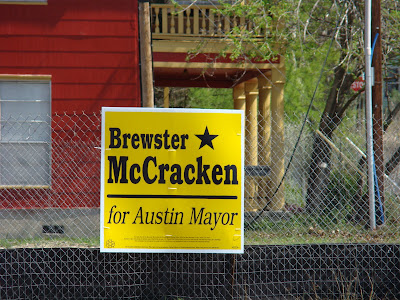 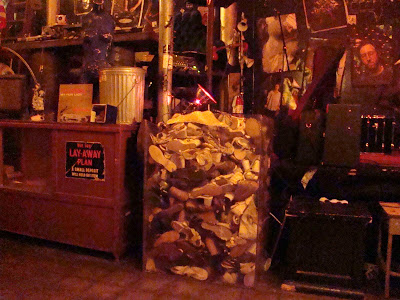 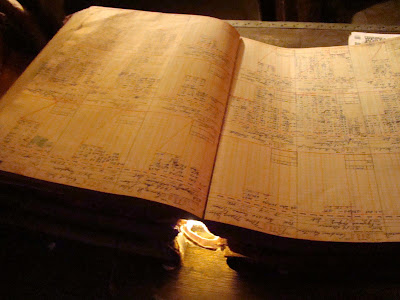 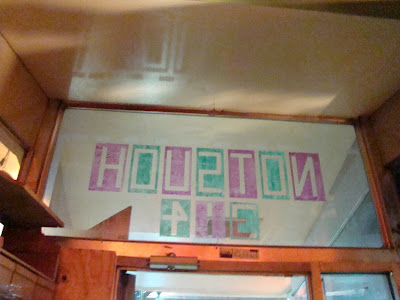 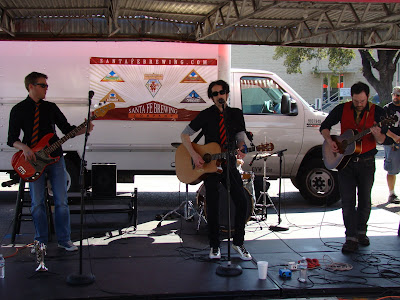