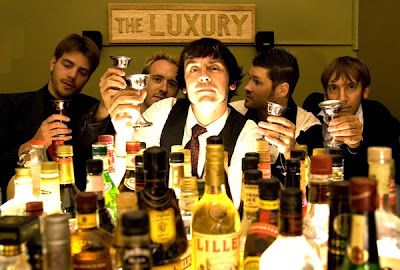 The Luxury – Seriously, what nerve!?!?! These guys get together and start writing these songs that stick in my head all day. They go work hard on the songs until their performances are tight and spot-on. They have these damn excellent melodies, harmonies, and great arrangements. Then, they start doing all kinds of stuff in Boston like winning all of these contests that we’re also involved with. First, they beat us to open for Coldplay: http://www.the-motion-sick.com/search/label/coldplay. Now, they win the 2009 WBCN Rock ‘N’ Roll Rumble! In between, they play a bunch of really awesome shows with us…

Not only that, but at the end of the night, when the Rumble winner was announced, they had to go and be awesome and thank all of the bands and really push the whole community spirit of the thing. Not only do they win all of this stuff, but they have to be nice about it too. I’m sick and tired of it! I’m not going to stand around and let these guys help build a strong music community in Boston where bands all push each other to rise to the occasion by being better and better every day!

I am so angry that in retaliation, I am going to go to their CD release show at The Paradise on July 11th and I am going listen to those awesome songs and cheer and clap. You should do that too in protest of them being so good and such a bunch of nice guys. That will really teach Boston bands to think twice about working to make the music scene into something really great.

…but seriously, congratulations to those awesome guys! They put on three great performances to edge up to the top of the crop. The truth is, there were A LOT of good bands this year and I was really impressed with how the whole thing came together. Gene Dante and the Future Starlets and The Dirty Truckers were also phenomenal in the rumble finals.

It’s absolutely a cliche, but I think it’s fair to say that everyone really won this year! My very sincere congrats really does go out to the guys in The Luxury. It’s hard for all of us 2nd-24th place bands to toss out all of the crumbs of envy and give them the biggest smiles possible, but they really have worked very hard and have earned their place. I hope this is the start of bigger things for them! (As long as they always promise to give me backstage passes)

Here’s their video for “Malcontent” – we were invited to be part of the party scene in this video, but we were actually shooting our video for “30 Lives” on the same day.

Malcontent (The Luxury) from The Luxury www.theluxuryband.com on Vimeo.