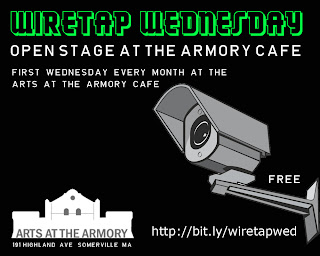 November Wiretap Wednesday is here! We are sad to say that this will be our last Wiretap under our hosting. We’re very proud of what we’ve done with the night and have truly enjoyed hearing many inspired performances over the last year and a half. Our commitments to our own projects are just so overwhelming at present that we have to pass the night on. We’re very happy and excited to announce that the very hilarious JUSTIN P. DREW will be taking over as host starting in December.