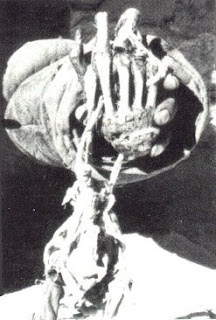 That is not some euphemism of unknown origin, but rather a statement of the rumor that Jimmy Stewart allegedly smuggled a Yeti hand from India to London in his wife’s underwear in 1959.

The Pangboche Hand, an artifact stolen from Nepal (see: http://en.wikipedia.org/wiki/Pangboche_Hand), was sought by wealthy businessman and adventurer, Tom Slick. He allegedly sought to analyze the hand to determine its origin and hired thieves to remove pieces of the hand from a Buddhist monastery in Pangboche, Nepal. The stolen pieces were replaced with human bones. After transport of the hand to India, Jimmy Stewart agreed to receive it and bring it back to London.

(the text below is stolen right from the wikipedia article)
Cryptozoologist Loren Coleman rediscovered this story while writing Tom Slick’s biography in the 1980s. Coleman confirmed details of the incidents with written materials in the Slick archives, interviews with Byrne, and correspondence with Stewart. Byrne later confirmed the Pangboche hand story via a letter from Stewart that Byrne published in a general book on Nepalese wildlife.

Loren Coleman chronicled his research into the unknown history of the “Pangboche Hand” in two of his books, Tom Slick and the Search for Yeti (Boston/London: Faber and Faber, 1989) and most recently in his Tom Slick: True Life Encounters in Cryptozoology (Fresno, CA: Linden Press, 2002).

London University primatologist W. C. Osman Hill conducted a physical examination of the pieces that Byrne supplied. His first findings were that it was hominid, but then later in 1960 he decided that the Pangboche hand was more in line with what he would find from a Neandertal.

During the high-publicity 1960 World Book expedition, which had many goals including gathering intelligence on Chinese rocket launchings, controversy regarding the hand was inspired by Sir Edmund Hillary and Marlin Perkins who took a sidetrip in Nepal to investigate and debunk the Yeti. What was unknown to Hillary when he examined the Pangboche hand was that he was looking at a combination of original and human bones placed there by Byrne. Naturally, Hillary determined the artifact was a hoax.

In 1991, in conjunction with Coleman’s research, it was discovered that the Slick expedition consultant, an American anthropologist by the name of George Agogino, had retained samples of the Yeti hand. The NBC program “Unsolved Mysteries” obtained samples and determined they were similar to human tissue, but not human, and could only verify they were “near human.” After the broadcast of the program, the entire hand was stolen from the Pangboche monastery, and reportedly disappeared into a private collection via the illegal underground in the sale of antiquities. George Agogino, before his death on September 11, 2000, transferred his important files on the Pangboche Yeti hand to Loren Coleman.