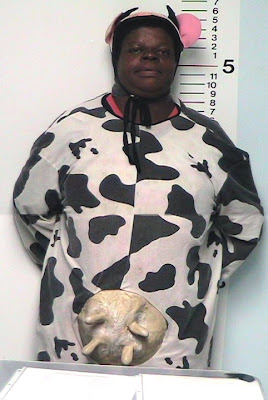 MIDDLETOWN — A Middletown woman is accused of being disorderly in public — while wearing a cow suit.

A police report filed about the incident said Michelle Allen allegedly chased children in her neighborhood while wearing the suit on Monday evening.

Allen also urinated on a neighbor’s front porch, the report said, and was warned by officers to go home and stay there.

Allen was charged with disorderly conduct after an officer found her causing traffic problems on North Verity Parkway.

The officer’s report stated that Allen was verbally abusive to him on the trip to jail and smelled of alcohol.

The report did not speculate as to why Allen was wearing the cow suit.