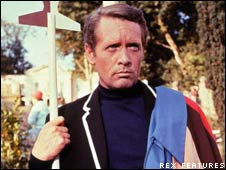 I am very sad that my favorite actor Patrick McGoohan passed away yesterday at the age of 80. I am slightly disturbed by the fact that last night, we completed our viewing of the 86-episode, 18 DVD box set of Secret Agent / Danger Man. We saw the final episodes, which were the only two shot in color. The next morning, news arrives that McGoohan had passed.

Soon after the end of the Secret Agent series (which ended at the star’s insistence), McGoohan launched his own series, The Prisoner. The first 7 or so episodes may just be the absolute best television ever produced. The show was essentially a continuation of Secret Agent, though could not be formally affiliated due to character ownership issues. In the show’s opening sequence, a secret agent bursts into his supervisor’s office, slams his hands on the desk, and hands over a letter of resignation. He scrambles home, hurriedly packing his things, knowing that there is little time to spare. However, he is too late. A man had followed him to his home and now knocks him out with a spray of gas. When the agent wakes up, he is in the familiar surroundings of his own abode, but when he pulls aside the curtain and peers out the window, he is anywhere but in London.
The show proceeds as the agent, whose real name is never revealed in the series, is assigned the number 6 as his identity. He tries to escape from his new surroundings, but never can. He is confined here, a place called The Village, where quite odd things happen, and it’s never clear who is a captor and who is a captive.

The show’s absolutely, stunningly amazing allegorical style, wit, and suspense established the tone for virtually every modern sci-fi TV series. Extremely clear references can be seen in shows like Twin Peaks, The X-Files, and Lost. The show is mindblowing today, even 40 years after it aired.

Secret Agent / Danger Man, although less cerebral, was also a wonderful and fun spy series. The first season of the show, in which episodes lasted only 30 minutes always ended abruptly, allowing the viewer to extrapolate outcomes. Although that may sound simple, it is unsettling to modern audiences used to spoon-fed closure. The show was put on hiatus after the first season. Then, the massive success of the James Bond movies prompted its return as an hour-long series in which McGoohan, who originally played a NATO agent without specific national affiliation now played a British intelligence agent.

The Bond movies actually borrowed heavily from Danger Man in many areas including the tag: Bond, James Bond (Drake, John Drake on Danger Man). Patrick McGoohan was asked to play James Bond at one point, but he declined because he was unwilling to kiss a woman on screen (or even have implied relations or womanizing), as it went against his moral principles as a devoutly married man. He comes off in the few interviews he did as a tough, but very intelligent and interesting individual. McGoohan has always kept his private and family life very private and most of his fans have respected that choice including Roger Langley, the author of his recent biography Patrick McGoohan: Danger Man or Prisoner?. There are great interviews with McGoohan on Youtube. I have chosen not to include them here because they include many spoilers for The Prisoner and give specific interpretations for events and ideas that are, at the very least, flexible to individual interpretation.

Sophia and I were both struck so heavily by The Prisoner that we decided to name our band Do Not Forsake Me Oh My Darling after an episode of the show (though we do also know that the episode title is a reference to High Noon, which we also love). We even hope to wear stage outfits inspired by costumes from The Prisoner.
Although Patrick McGoohan had essentially been out of acting for some time now, I am as saddened by his death as I possibly could be for someone I didn’t personally know.