Sustainability is a big buzz word around Portland, OR. Though I was pleased that most places had bins for compost, and left water out (for me to easily refill by steel bottle-and let me avoid buying bottled the whole trip.) Most of the vegan places in Portland are cafes – so we ate a bunch of sandwiches all week. You can only live on sandwiches for so long, I’ve decided.

Here is the run-down on all of the places we went.

For food, our favorite by far was Blossoming Lotus. We went twice even. The weird thing about BL is that it is attached to a yoga center – it was very distracting walking into the bathroom of the restaurant you’re eating in and seeing naked ladies walking in and out and around the showers. Day one – I had the most enormous burrito (which tasted like the best thing ever, after being on the plane for what seemed like decades). Mike had the bbq soy curls sandwich (our first experience with soy curls – my opinion is that they almost cross the line to being too ‘meaty’-didn’t stop me from bringing some home though-as you’ll see later) They also had vegan soft serve ice cream! They carry one flavor at a time, and the first day it was mint chocolate chip–it was seriously rich and delicious. Our second visit there, I got the monk bowl, which was brown rice, beans and kale with a peanut sauce – very hearty and tasty. Mike, again, got the bbq soy curls sandwich. This time the soft serve was plain ol’ vanilla – while it was good, it wasn’t nearly as exciting as the mint chocolate chip – which Mike had delcared was the best thing he’d ever put in his mouth hole. 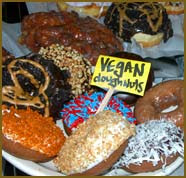 Voodoo Doughnuts, I’ve decided, is the happiest place on earth. They have the best doughnuts I’ve ever tasted – and a large vegan selection. We went there three times in four days – each time eating more doughnuts than I care to admit. We stuck to three flavors, of which our favorite was the frosted sprinkles, Mike liked the powdered doughnut, and I also enjoyed a “Portland” (ahem, Boston) Creme. Voodoo also does weddings – if only I had known! Go there, eat, get married!

Papa G’s Vegan Organic Deli A Vegan Deli – how awesome is that. We enjoyed mashed potatoes with ginger gravy, a meatball sub, a bbq tofu sandwich, and a bowl of macaroni salad so close to the real thing it was almost gross!

Bye and Bye – is a hipster bar that was non-smoking before non-smoking was a law. The place reminded me of Bukowskis in atmosphere. I got the Eastern Bowl: brown rice, broccolli, tofu in a peanut sauce. Mike got the BBQ platter: collard greens, bbq tempeh, and baked beans. Tasty, and if you go at happy hour, as we did–super cheap!

Proper Eats was way in the middle of nowhere – after a 45 minute bus ride through residential areas we came upon a block of stores in “St. Johns.” Proper Eats is located behind a small grocery. The food had great presentation – very fancy with the garnish. I got the nachos–PE makes their own cheese sauce – which my tastebuds would guess was made from cashews and nutritional yeast. Mike got the tempeh reuben.

Finally, to the ‘vegan mini-mall’ – which is more like a block of cool vegan stuff. I’ll go in the order that we went to them:

Red and Black Cafe – a worker owned collective, we ate more tasty sandwiches. This time I got the tempeh reuben, and Mike had a “tuna” like sandwich. Our order took a few minutes to come because one of the customers got all of the workers to take a survey on what it means to be vegan – I was sad she didn’t ask us to also take the survey.

Then, to Herbivore – a cute clothing store with slogan’s like “eat like you give a damn” and “I heart tofu” I picked up a pretty awesome wallet here, additionally the staff were super nice.

Next door over is Food Fight Vegan Grocery – a place I’ve done online orders for obscure vegan stuff a bunch of times. The physical store was more like a mini-mart. I regret not buying the can of vegan haggis, or the vegan caviar or the pate, but we did pick up some soy curls, jerkey, and chocolates. Check out their website and read thier snarky descriptions of items (example: Vegan Chedder Crackers “Product Description: Most Holy Jeebus! We finally got these. Pretty much just like those “goldfish” crackers every kid used to make a mess with. Except organic and more expensive! Awesome!”)

Our final destination on this block was Sweetpea Baking Company we got a coffee cake that was delicious, and a chocolate-peanut butter bar that was good but really rich. We also found Sweetpea cookies at most of the independant coffee places that we went to.

Speaking of coffee, try Stumptown Coffee Roasters if you go–I didn’t actually make it to one of their locations, but Backspace cafe served Stumptown coffee and it was the best latte I’ve had in a while. Backspace also has vegan sandwiches but we were there before the kitchen opened and had to make-do with bagels. Backspace also carries Voodoo Doughnuts, and has cool art – so all-around local and worth checking out.