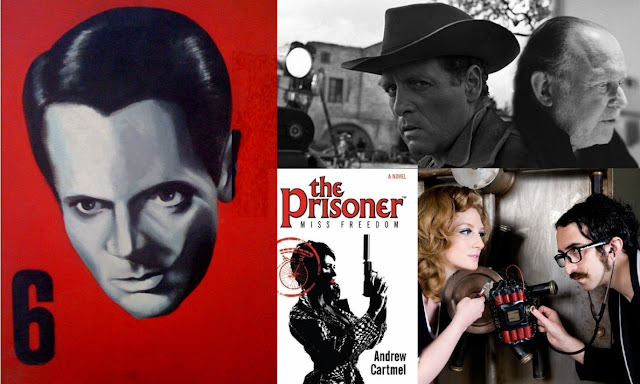 clockwise from left, ‘No.6’, painting by Simon Palmer, Patrick McGoohan on the set of Living in Harmony, Ian Rakoff at Comica, Michael Epstein and Sophia Cacciola a.k.a. ‘Do Not Forsake Me Oh My Darling’ and the cover of the novel ‘Miss Freedom’ by Andrew Cartmel

Celebrating 42 years of the cult TV show The Prisoner – Alex Fitch talks to a couple of writers who have continued the adventures of Patrick McGoohan’s iconic character No.6 in other media. 1980s Doctor Who script editor Andrew Cartmel has written a new Prisoner novel ‘Miss Freedom’ while Sophia Cacciola from the band ‘Do Not Forsake Me Oh My Darling’ has written an album of songs based on each episode of the TV show. Also, actress and comedienne Jessica Fostekew reads from the novel accompanied by sound effects and music from the show…

For more info, please visit the home of this podcast at Sci-Fi London (originally broadcast on 01/25/10 in an edited form as part of a Clear Spot on Resonance 104.4 FM).

Links: Info about Andrew Cartmel’s The Prisoner: Miss Freedom
Listen to Alex’s interview with Ian Rakoff about writing Living in Harmony and co-editing It’s your funeral and The General.

Alex also had us write up our 10 favorite/most influential movies in a piece called Film Jukebox for Electric Sheep Magazine – check it out here.