We bring you a series of features on the fine staff of The Michael J. Epstein Memorial Library. 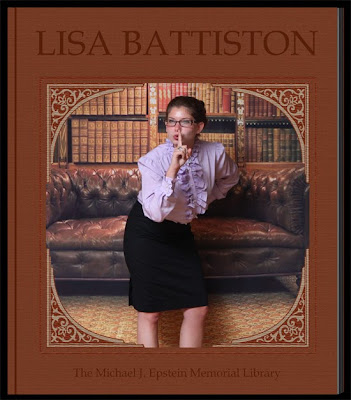 Several years ago, Lisa was formerly playing a not-so-great guitar in an Indianapolis all-girl band when she abandoned the guitar and offered to fill the bass spot. After a long run in Indy, she left the all-girl band and ran away to Boston where she is also a creative writing MFA candidate at Emerson College. She plays bass for the Michael J. Epstein Memorial Library, reads a book a week, and gets tattoos on her back for all of her favorites.

Favorite Author: It’s hard to choose one because I tend to like lots of different writers for lots of different reasons. I’ll hold strong to J.D. Salinger, though, since he’s the only writer with two books memorialized on my back in permanent ink (an idea he probably would’ve scoffed at). I tend to think he is one of the most definitively important American short story writers. Also, nearly every one of his characters is a smoker, and that’s something I can identify with.

Favorite Movie Based on a Book:  Anything based on a Stephen King novel. He’s got lots of stories that transfer well to film. But really? Isn’t the book pretty much universally better than the movie?

Favorite Song Based on a Book:  “The Heart Is A Lonely Hunter” by The Anniversary (or, Carson McCullers, depending). It’s a rad song and an even radder book.