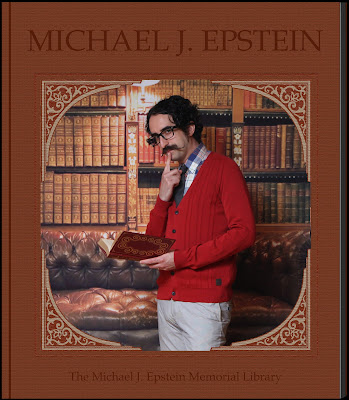 Michael J. Epstein, great-great-great-great-great grandson of Michael J. Epstein is allowed to work in the library because he has the same name as its honoree and also because he threatened to sue.  He spends most of his time reading the chapter books in the young adult section.  He expects to reach Reading Level 6 by the end of the year.  He is also known for standing in the front and center and holding an acoustic guitar during times when The Motion Sick is on stage and standing on the right, holding a bass that makes crazy bassy/guitary/organy sounds during times when Do Not Forsake Me Oh My Darling is on stage.  He also holds the ukulele and stands on alternating sides of the stage while Neutral Uke Hotel is on stage.  Additionally, he has a mustache and is absolutely fascinated by mummified squirrels.

Favorite author: Michael J. Epstein has only read books by Kurt Vonnegut.  He also wrote a very moving piece about books that influenced his songwriting for Largeheartedboy.

Favorite book: Michael’s favorite books are any books with pictures of dinosaurs, centaurs, minotaurs, or anything else that ends in -aurs, with the exception of Melissa Auf Der Maur’s solo records, which aren’t books anyway, so they are twice disqualified.  Also, he advises that you never trust a Canadian with a German name.  That’s what they always taught him in school.

Favorite band based on a book: The Velvet Underground

are a band named after a book…and a damn fine one at that.

Favorite song based on a book: The most literate bands tend to be melodic metal/hard rock bands.  Think about it for a moment.  It’s true.  Of course, they always write about Tolkien and stuff.  Iron Maiden, Black Sabbath, and Led Zeppelin are the original wizard rockers (OWRs).

Favorite movie based on a book: Fight Club is the only movie for which the film and book are equals.  Usually, the book is much better than the movie (too many examples to cite) and once in a while, the movie is better than the book (The Wizard of Oz, Logan’s Run, Planet of the Apes).
Find Michael on [Facebook] [Twitter] [Last.Fm] [Youtube]