Sophia Cacciola & Michael J. Epstein
Home » 50 Most Recent » We do need curators, but we don’t need gatekeepers or why you should stop using Pandora
50 Most Recent | Michael

This has been picked up over on Music Think Tank, so head over there!


To Eleven has a nice follow-up post discussing some of these ideas as does Rhythm Hub. Earbits also opened discussion on the topic. There was also an older post on Music Think Tank exploring some similar thoughts. 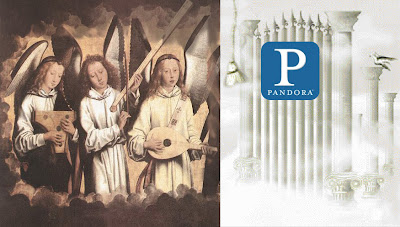 Allegedly, Pandora now controls 3.6% of radio listening. This is an impressive figure, but, to me, a disturbing one. We’ve all spent the last few years touting how the Internet has changed music distribution and flattened the playing field so that everyone has equal access to distribution. Traditional terrestrial radio, with ever-shrinking playlists that contain almost new music certainly aren’t designed to appeal to a future audience, they are designed to grasp onto a shrinking past audience. I used to discover new music by listening to college and commercial radio or watching late-night MTV. How do the kids do it these days?

For a little while it seemed like there might be a few very influential bloggers and media outlets that could give artists big boosts, but I’d argue that most of the influential writers have had their influence downgraded as of late – Pitchfork, Perez Hilton, and even Brooklyn Vegan don’t seem to break artists quite as readily as they once might have.

Along comes Pandora. In some sense, noble in mission – to help people discover new music that might appeal to them given artists they already like. The only problem is that we’re back to a closed system. Pandora decides what music goes into the mix and frankly, their choices for independent artists seem arbitrary and just plain bad in many cases. I certainly am biased by the fact that of 5 albums I’ve submitted for inclusion, only one has been accepted. In my opinion, it is maybe the 3rd or 4th best of the albums I’ve submitted. Two of the excluded albums include my most successful songs to date.  My most popular song, “30 Lives” (50,000+ views on Youtube and modest, but higher sales numbers than anything else I’ve ever done) has been excluded from Pandora. Okay, I am sure this will draw criticism saying that my music is bad and doesn’t deserve to be there, but that is not really the point. I don’t want to implicate friends and colleagues, but the exclusions and inclusions seem 100% arbitrary – in my view of indie artists that I personally know, sometimes terrible music makes the cut, great music does not.

Why should you care? This reverses the democratization of the playing field and puts the power into the hands of a monopoly. How does Pandora decide? Some person listens and makes an arbitrary, subjective decision. No appeals, no examination of the merits of the music based on other opinions nor track record. Just one listener. While 3.6% is not tremendous yet, what happens if Pandora is 50% of radio? We digress to a monopolistic organization deciding what music people find out about. You, the listeners, are the ones that suffer most. I realize again that this will sound like it’s specifically about my exclusion from the system. To some degree, that does motivate me to complain, but really, it’s a “class-action” problem.

Solutions: I understand that Pandora wants to serve as a curator to provide you with music that you will like, but do they need to block music from even being considered? I don’t expect Pandora to deliver terrible music to people, but I think the bar is clearly set too high (and by high I mean they reject too high a percentage of stuff – not that the quality is set high at all). One solution is to let people adjust the riskiness of their listening recommendations – i.e., Pandora raters hear my song and think it’s not all that likely that people will like it, so they rate it as risky. The song is then only delivered to those willing to take risks. If lots of those people like the song, it gets upgraded to less risky. Let the listeners decide. Alternatively, simply have a body of the public rate songs for Pandora. Don’t let the decision get made by a single Pandora employee.

UPDATE: I didn’t even mention that in order to even submit music for consideration, it must be available for sale in CD form on Amazon. The process for getting CDs sold on Amazon is tedious and sales via Amazon for physical media result in virtually no profit. I am moving toward not even putting out music on CD, which will automatically exclude future releases from the Pandora catalog.

As an aside, I actually used Pandora before I ever submitted music to it and quit after about a week for several reasons:

2. Dave Matthews. I could not block artists or say “never ever ever ever ever play this artist.”  I could block songs, but I apparently would have to wait for all 600 DMB songs to come up before I could guarantee that I’d never have to hear another one. Then, I’d have to do the same for John Mayer and Vampire Weekend and all of the other artists that are apparently similar to artists I do like.

Not worth my time.

Love to hear your thoughts on Pandora and whether listeners should demand a larger catalog in the comments below.