By now, you’ve likely seen our recreation of the opening sequence to the 1960s TV show, The Prisoner, and probably also heard us rambling on about how it took two years of planning and 11 days of shooting (link).

And, here’s a link that compares our version to the original. 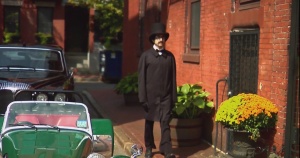 But, we’re not the only ones to have had this glorious idea to pay tribute to The Prisoner in this way. I think the appeal of the opening to this show is that it is a complete narrative in a sense (in fact, it’s pretty much the only background we ever get on how No. 6 ended up in the Village!), and it’s so full of emotion and tension. McGoohan’s incredible acting has a way of drawing you into the moment with him – and because it is so rich, it really lends itself to tribute, recreation, and even parody. In the research for our video, we began to come across a lot of groups who, like ourselves, felt the compulsion to put ourselves in McGoohan’s shoes. So, without further ado, here are my personal favorites:

“Tractor Girl” as I’ve affectionately come to calling this clip is truly ingenious. I particularly love the trampoline and the teepees subbing in for the locations in The Village – she also did a fantastic job with the camera angles and her McGoohan mug is spot on!

Next up, The Prisonbear! This is a hilarious spoof starring a stuffed teddy bear (and even a model-size replica of the Lotus 7)! Again, the attention to detail here is fantastic. This video goes even further and recreated the entire first episode  – with Number 2 being played by…a Number 2!

1980s new-wave band, Altered Images, also did a music video with a lot of thematic and visual nods to the opening. (It was a little controversial when we were making ours because AI have a female lead singer portraying No. 6 – but their approach was very different from ours.) AI took a lot more liberties with the material, and though not a shot-for-shot recreation, it includes many elements of the opening (e.g., the typewriter, the gassing) and they even traveled to Portmeirion (in Wales – where The Prisoner was originally shot) to shoot a lot of Village scenes!

The Times are another ’80s band. They had a quirky song called “I helped Patrick McGoohan escape” – their video has a lot of the opening pretty much in sequence including the Lotus driving around London – they were also lucky enough to shoot on location in Portmeirion:

Finally, there’s a fun tribute (especially the driving sequences) in this episode of Coupling (think Friends but British and actually witty and funny) – starts aroun 8:38:

Those are my favorite tributes to the opening titles of The Prisoner – of course there are many, many other nods to various elements of the show in pop culture (including a full Simpsons episode) and this hilarious Renault commercial (hilarious because the Renault 21 is so conventional compared to the sleek Lotus 7) to name just two of hundreds! Any great tributes to the opening that I’ve missed? Send them our way – I’d love to see them!