Sophia Cacciola & Michael J. Epstein
Home » Music » DNFMOMD » How Much Do You Need to Operate a Band? $100,000 to ramp an indie band to success…perhaps true, but not in the form of the unbelievably poorly conceived article on TIME
50 Most Recent | Darling Pet Munkee | DNFMOMD | Michael | MJE Memorial Lib | Music | Music Videos | Sophia | The Motion Sick 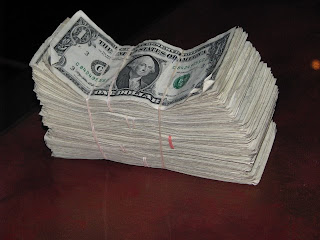 The TIME article, “Want to Be a Rock Star? You’ll Need $100,000” has been making the rounds recently and repeatedly infuriating me. Why? Well, it’s both horrific in its accuracy and its inaccuracy. The problem is, these stupid kids in some terrible band that, because of the stupidity of this article, I now have a permanent vendetta against, haven’t even the slightest clue what they are talking about.

The first issue is they include nonsense in the count: singing lessons, “lost” wages from playing music and not working, and living in NYC are absolutely NOT expenses associated with starting a band. I am actually insulted that the editor(s) at TIME didn’t trash this article long before it hit the net. I am usually completely behind their fine reporting (okay, I’m a little biased on that one…).
The thing is, you can EASILY spend $100,000 on a band – even in a year – in an attempt to break it. I’ve been reluctant in the past to disclose all my band finances, mostly to protect people I’ve worked with and their working rates, etc., but let me give you all a general breakdown from my ACTUAL experience, not some inexperienced kids who got their manager to connect them with someone at TIME and let them write an article that is based on nonsense.
While not anywhere around $100k, here’s my count on one solid year of hard work at dirt cheap prices in the realm of what I am doing. This is what I would call the MINIMUM you can get by spending without replacing these functions with volunteers or band members. Can you spend less? Sure. Can you spend less and make serious headway? I don’t think it’s easy.
Silly Stuff
Let’s first get the silly stuff out of the way. Rehearsal Spaces cost money to rent. Instruments cost money to buy. Accessories hit you harder than you’d think (cables, sticks, cases, etc.). Even if you have nice gear, it’s pretty easy to spend $1000 a year on upkeep/accessories for a serious band. I’m not going to break it all down, but we’ll call it $1000. Practice space rent, if you need a space and you share it, can maybe be squeezed out for $2000 a year if you coordinate it all well. Web hosting costs a little. Other small things pop up.
Silly stuff total = $4000
Recording – assuming one record per year
You want to make a record the right way? It takes a lot of hours. If you work with people that are relatively cheap and you’re relatively rehearsed, you can probably burn through drum tracking in a single 10-hour day. Guitars, bass, vocals, if you’re really ready and really good, can all be turned out in another four 10-hour days or so. Mixing 10 songs? Five 10-hour sessions. In my opinion and experience, this is an ambitious and rapid track. Nonetheless, best case, we’re looking at 100 hours of work. If you get an album done in 100 studio hours, you are my hero! Let’s call it 100 anyway. At dirt cheap studio rates, you’re looking at $35/hour for a total of $3500. That’s the dirt cheap minimum! We’ve sometimes pulled off Do Not Forsake Me Oh My Darling 6-song EPs in this range. I’ve never pulled off a full-length in a studio for anywhere close to this.

This is all again, a remarkably low number for making a quality record. It’s easy to spend $10-$20k (or more) to do it right! I am just giving a corner-cutting estimate.

Photography and Design
You need a band photo shoot. You need it to be done well. Again, there is a huge range. You can spend nothing or you can spend $5000. It’s fair to say $500. Can you work with people who will do it for less? Depends on the complexity of the shoot, whether you are asking a photographer to also be an art director and develop ideas, etc. If you want someone to develop ideas, help dress you, etc., please don’t spend less than $500! Design work for your album? Spend at least another $500

Music Video
Tomorrow is today! Everyone expects that you will have video content. In fact, we’ve come around to doing as many video projects as humanly possible. Like all things, video budgets can range wildly from $200 for a video that we shot ourselves (with a few thousand dollars worth of video gear we bought or borrowed) or several thousand dollars from the band budget for a video that took two years to make with a director that not only worked for free, but paid for half of the video! If you want to make a good video with pros and, again, want someone to develop a concept, do art direction, coordinate locations, extras, props, etc., you are easily looking at $5000. That’s a low number and that’s for ONE video, not for the 10 you should be making for your full-length record.

Promotion
Promo is perhaps the trickiest one to consider. You can really tailor promo to your budget. You can spend no money or a million dollars. Realistically, for an indie band that is going to get any level of success, you are looking at no less than $5000 for press, $2000 for radio, plus another $3000 in mailing expenses.

Yes, that’s more than your record cost to make. Wow, sounds super expensive? Not even a little. Most bigger bands spend WAY more. There are packages that cost $20000 JUST to promote an appearance at SXSW. You want to be a SXSW buzz band? I hope you have $20k+ earmarked just for that.

Tour
There are rumors that bands break even touring, but I’ve never met one that does. If you are lucky and you can get a booking agent and get good shows, you might not lose too much. Most bands can’t afford to tour extensively. Most shorter tours lose more money. Even our Neutral Uke Hotel tours, which sell out shows virtually every night, end up losing money. New band? Want to tour? Expect to lose $1000 a week. Want to tour for 3 weeks a year?

Grand total for one year of band operations at bargain basement prices = $31,000

I can’t afford that, let alone hiring the radio or press publicist that costs $20,000 more than that, but has a friend at Rolling Stone, etc. So, what do I do? I am finding ways to perform a lot of these tasks myself. Curious? Well now, some actual numbers from my bands. I am not spending as much as I would need to in order to “break” these bands. Why? I don’t have the money to blow. I still think this might be helpful to people to provide a frame of reference. I’ve learned that it’s easier to cut costs to “make” more money than to actually directly earn more money on music.

First of all, the range is huge. The first record by The Motion Sick – when there was no band – required a lot of producer work and studio time. I did a ton of promo and radio work on my own – I had no publicist at the time. It was all delivered at a discount and the record/band still lost me a solid $60,000 over that first year or two from recording, promo, operations, etc. That is including what I recouped from a decent number sold. That was the most I spent on a record and it was primarily because I didn’t have systems in place to work efficiently.
For our second album, we won a contest to get free recording and my bandmate Matt Girard did a ton of tracking and extra work on his own, but this time I hired (good quality, but relatively cheaper tier) radio and press publicity. We paid to have a really pro photo shoot and pro post work done. On this record, after recouping a pretty decent amount – some via sales, some via licensing, etc., I only lost $25,000 (still recouping some here, but will undoubtedly never break even).
For The Michael J. Epstein Memorial Library’s debut, I took a different approach. I knew with 9 members and guests, we’d be talking about countless studio hours. By my math, we’d be looking at no less than $10,000 in a cheaper studio for tracking the songs ONLY. So, I decided to step up and do what I had wanted to do for years. I spent about $5000 on recording gear and, with the exception of drums, which we tracked in one day at Q Division, I tracked the remainder of the record at home. By my count, I’d just saved five grand AND I now had a studio I could use for all future recordings. We got a grant from the Passim Iguana Music Fund for $2000, which helped offset a decent portion of the mixing and mastering costs. As you can imagine, ten songs with 40+ tracks each takes a bit of time to mix still! The great news: making this record and pushing through this band – doing press and radio promo, mailing, etc. with my streamlined budget methods, has only resulted in me being about $7000 in the hole after the first year.

Sophia would have to provide whatever details she wants regarding Do Not Forsake Me Oh My Darling, but even with rapid recording and a lot of volunteer assistance, our desire to do good audio and video work has put us a bit in the hole. We’ve never directly hired any radio or PR for this band – Sophia does it all herself – so those costs are kept down, but no doubt, we’re still talking about losing 5 figures over the course of the band’s life. (Sophia’s Note: each EP has cost about $2000 to record, add another $1000 for duplication of The New Number 2. Also, we did hire a PR company to do TV Promotion for our music video for Episode 1: Arrival – an 8 week TV-only campaign cost $3000, of which $1000 was just dubbing the video into various formats/tapes to deliver to studios. An unknown band on tour for 10 days, that had to rent a van – we lost $2000 on that tour.)

Darling Pet Munkee is a side project that is a little more laid back and just for fun. I tracked, mixed, and mastered our entire record myself. We are doing print-on-demand duplication. I shot and edited a music video at virtually no cost (which has more views than most expensive videos at the moment!). Total loss – for supplies, outfits, etc. = $800