We’ve had an amazing first day kickstarting our new feature film, MAGNETIC – thank you so much to everyone for your support of this project so far! We are beyond humbled and cannot wait to thank you all personally. As is our way, we love sharing every step of production, so here’s a little bit about how we did the poster!

The movie has scenes of our protagonist sitting in a sterile office calling people from an old, green rotary phone to tell them that their children have died. The film will also be using mixtapes very extensively, both in the office environment, and as the character’s own obsession. So, for the poster, we wanted to work in both of those props with our lead, Allix Mortis.

Michael was excited to try a double-focus photo where the top of the photo (Allix’s face) and the very bottom of the photo (the writing on the tape) were both in focus while the middle would be a little blurred out. We tried it out on me late one night to make sure the concept would work.

We needed the table to slant downward to get the proper effect, and rather than using a drawing table like sensible people, we made a fake table out of a large foam-core board that we covered in wood-grain contact paper (the fake desk was a trick we picked up from working on our “Episode 1: Arrival” music video). This looked terrible in person! The table sagged a little bit from the weight of the phone, so we used one of my drum cymbal stands to give it some extra support in the middle and two chairs padded with jackets on one side (to make one side taller) to hold the whole thing up. That is a sheet gaff-taped to the wall as the backdrop. I was pretty sure Allix would just leave once she saw our crazed set up, but she stayed and we got exactly what we wanted for the photo.

There was a lot of heated discussion about which way the phone would face. I felt that having it face forward was an affront to realism, as there is no way she dialed it like that; while Michael aesthetically liked the front of the phone facing out as it looks cooler than the boring back of the phone. We had agreed to do the photo both ways and to argue about it later; but I gave up to aestheticism pretty quickly, as I just love the way the rotary phone looks. I also love how the green of it picked up the green in Allix’s eyes…but perhaps that is for another post.

We shot each pose two ways, one with Allix in focus and then the same pose with the tape in focus.

Next, that foam-core board’s job was not done! For the ‘font’ of MAGNETIC I spelled it out with glue and actual cassette tape, and then we photographed that from above. Finally, we had to Photoshop all three photos together, which definitely took some magic, and a lot of Michael and I trading it back and forth finessing it. For the main font, we used an old-style dot matrix printer font, as we also plan on getting our hands on a dot matrix printer for our character’s office (have one, you’d like to loan to the movie, or would like to check out other things we need? – go here please). 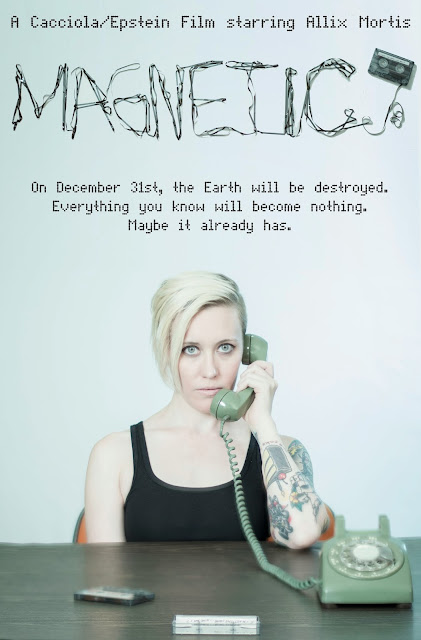