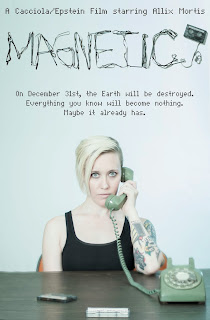 With our Kickstarter campaign at the halfway point, we thought it was a grand time to shed a little light on our casting process for MAGNETIC and to get to know Allix Mortis a little better. We knew we didn’t want to go through an open casting for MAGNETIC (even though we had great results for TEN for the few roles that we cast that way) as it’s a bit of an unwieldy, time-consuming, harrowing process. So, we thought long and hard about what we wanted the character of Alice to look like, how she would act and move and respond. Then we thought about the actors and performers that we knew around the Boston area. We had seen Allix perform numerous times; and their pieces were always provocative, smart, and clever and we decided they were perfect for the role. As you saw in the Kickstarter video, I just called Allix up (how I got their number is NOT IMPORTANT) and they accepted:

So, a Q&A between Sophia & Allix:
Sophia: What is your acting/performance background?
Allix: When I was a kid I wanted to be an actor more than anything. I was in every production ever and was usually producing my own shows in our family living room on the side. My parents were kind enough to indulge me and send me to children’s theater camp and let me sing in our really over the top church choir as well. I had really short hair as a kid and would often play male roles when we were short on boys. It’s no surprise that I grew up to be a drag king.

I stopped performing for awhile because I was a teenager and focused on things like leaving my hometown and going to college, but I never stopped loving it – and never stopped taking classes, studying, and learning. I even, very briefly, taught theater while I was getting my Masters’ degree in Chicago.

In my late 20s I discovered burlesque, rediscovered drag, and started taking classes with anyone and everyone who would take time to teach me or work with me. I’ve been involved with the Boston performance community for the last three years and have also been fortunate enough to perform in other cities around the country. I occassionally work with and direct actors as part of my “muggle” job and have been fortunate enough to have great mentors and talent to learn from there as well. My goal when I’m on stage is to entertain but also unsettle. 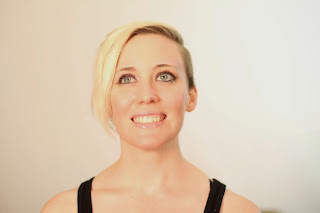 What are your favorite types of movies?
I love sci-fi movies and I LOVE LOVE horror movies (the campier the better). I’m also a big fan of film noir. My guilty pleasure, and I will freely admit this, are 80s action movies. If Jean-Claude Van Damme is in it, I will see it. (Please don’t fire me now that you know this). Producers’ note: JCVD 4eva!
WHAT’S YOUR FAVORITE SCI-FI MOVIE? Repo Man. Terminator 2 might be a close second.

How are you preparing for your role of Alice? Watching Repo Man non-stop.
In all seriousness, I’m going through the list of reference movies (Andromeda Strain (1971), Solaris (1972), Pi (1998), Primer (2004), Moon (2009), Drive (2011), and Upstream Color (2013)), carving out time to watch the films on the list, and I’m also spending a lot of time thinking about Alice’s voice. I actually keep thinking about moments in my life when I’ve had to have really difficult conversations (like firing people) but keep my emotions really flat and checked while doing so and digging into that. I think those memories are going to fuel a lot of how I speak as Alice.
What do you think will be the worst thing about starring in this movie?
Hmmm. I’m really excited about roadtripping to go hang out on a sheep farm. I’m also nervous about how cold/tired/wet we all might be while filming there – but I’m also looking forward to that. Because seriously – when else in my life am I going to leave my day job behind for a week to go live on a sheep farm and film a sci-fi movie?
What was your first cassette tape?
My next door neighbor Rich Zaremba (he contributed to the Kickstarter, “hi Richie!!”) convinced me that I should use some of my birthday money to buy Poison’s What The Cat Dragged In. I think we were 8 or 9 or something ridiculous like that and the mom who took us to the mall to go shopping was not happy about the purchase. My own parents shrugged but asked me not to belt out “Action” around company. That was the first cassette tape I ever bought with my own money. The first one ever gifted to me was a hot pink Jem & The Holograms mix that I listened to until it wore out.

[Producers’ Note: MJE’s band The Motion Sick played a halloween set as Poison in 2007!]
How do you feel about changing technologies and increased nostalgia for things from childhood?
I have interesting feelings about nostalgia.

Rotary phone or cell phone?
Rotary phones all day – they are much more fun (and easier) to dismantle.

Do you have a favorite sheep in history?
I thought long and hard about this, and while I love Do Androids Dream of Electric Sheep, there’s not really a sheep character so I’ll have to go with the lamb “having ten horns and seven eyes” from Revelations because that is one mega powerful scary sheep. Wait, has JCVD ever done a scene with a sheep? Because that sheep would be my favorite.