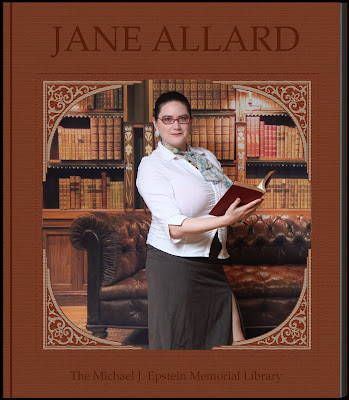 Jane has parlayed her few years of piano in middle school to an on again/off again keyboard gig in various projects. She has recently turned to several new instruments and has realized that the one thing playing guitar hero can prepare you for is playing the melodica. When not exploring playing her new instruments with her fellow librarians she spends her time teaching dance to kids and working at a software company.

Favorite author: I go through author phases. From my youth I loved Ursula LeGuin but more recently I’ve turned to non-fiction. I was obsessed with Michael Pollan, but I think I’m looking for a new author to love.

Favorite book: My most recent favorite book is The Girl Who Played With Fire. Yes I have joined the Stieg Larsson bandwagon. His books are addictive and a great read. I was so sad when I looked him up to find out he died after he wrote the first three, but before they were published so he never knew how well received they were.

Favorite band based on a book: Harry and the Potters – I’m just jealous I didn’t come up with a band name and theme that would instantly make you popular.

Favorite song based on a book: No songs come to mind even though I’m sure I like many songs based on books. Since I’m a librarian I did some research to find out which songs I loved were actually based on books and what I found is that ’70s bands frequently turned to books for inspiration. Led Zeppelin, Rush, and Iron Maiden were prominently featured on “songs based on books” lists with Tolkien and C.S. Lewis being major inspirations for many bands. While I liked many songs I found on those lists there wasn’t one that I could call a favorite.