Tomorrow night, The Motion Sick plays what I can best describe as its goodbye-for-now show.  It happens at TT the Bear’s, which is the same stage where we held our first real show, a CD-release party for Her Brilliant Fifteen.

I can’t really imagine that we’ll never play another show, so I really hate to call it the end.  I never really understood why anyone would put a brickwall finish on a band they loved being part of, so the same goes for this one.

Why bye-for-now?  I can only really tell it from my perspective and it’s not as exciting nor as dramatic a tale as anyone might hope for, but here’s the basic story.  I don’t want to be part of anything that isn’t being done with full motivation, drive, and heart.  It became pretty clear over the past 2 years or so (yeah, a gradual process indeed) that we just didn’t all really feel up to doing this anymore.  Everything about the band (except probably playing live) began to feel tedious.  We moved forward on projects and ideas at a snail’s pace and as much as I really didn’t want to stop doing it, it became apparent that there wasn’t really any choice in the matter.  Everyone had become involved in other projects or parts of their lives.  We did things out of obligation and mostly, I am pretty sure that we never really agreed about the things we should and should not be doing.  I think it was tiring for all of us.  Maybe personnel changes could have solved things, but it really felt like any changes would be like starting over.  It just wouldn’t be the same dynamic that we had.  It just wouldn’t feel right.  I am not even sure what changes would be the right ones anyway.  I just couldn’t imagine trying to keep the band going with anyone different. So, after watching the last episode of Lost (ultimately, a terrible, terrible, stupid show), the course of which (its ups and downs – excluding Lost’s ultimate terribleness) parallels the band in many ways…I said to everyone that I thought it was time to take a break.  I say break because maybe time will make us want to do things again the right way or get us excited about the band.  No commitments, no half-hearted efforts to change things, just let it rest for a while and see what happens.  So, that’s where we’re at.  We’ve got other projects happening.  I can’t decide if the other projects killed the band or if the other projects were symptoms of the band dying, but ultimately, it became impossible for us to balance something we weren’t interested in with things that we were…and when it comes down to it, why should we?  I think the band probably continued for a long time just because it was easy – we could get good shows, people liked the music, and ultimately, it was a band doing well.  It’s kind of strange though how perspective works on these things.  It doesn’t matter how well (or not well) a band is doing, it still doesn’t change desires and interests.

I thought about “retiring” from leading a band, but I still feel like I have a lot of musical ideas that I want to explore and I feel like I have learned a huge amount about band operations and function from these years with TMS and, as a result of all this and a drive to explore some different music, have started The Michael J. Epstein Memorial Library.  I also to continue my collaboration with Sophia (also in the MJEML) in Do Not Forsake Me Oh My Darling.  Right now, for me, these projects are just more exciting than The Motion Sick and feel like they are more natural and organic in their growth and movement.  From what I know, the other guys are also feeling the same way with other projects they are involved with and I totally support all of their projects and hope for their successes.  (See a list of other projects at the bottom of this post.)

So, this leaves us, for the moment, in a sort of limbo.  I do regret that we haven’t finished the 4-song recording we have started and I do hope we can find a way for that to happen.  We really hope to have our stuff in Rock Band soon.  I won’t even get into the many factors delaying that, but it has nothing to do with the band itself.  I really look forward to the release of the TMS songs from the Daytrotter session I did with Shawn and Josh from Golden Bloom in August.  I hope that we’ll all someday find the right time to play some more shows and maybe even work on some more new music, but I couldn’t make any predictions about when or if that might happen.  I just know that now isn’t the time. 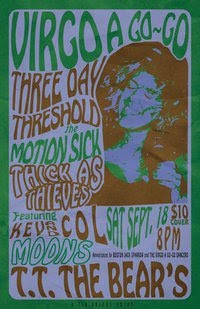 The 3rd Annual Virgo A Go Go will be held Saturday night September 18th at T.T. the Bears in Central Square, Cambridge. The main stage will feature Three Day Threshold, The Motion Sick (last show for a while), Thick As Thieves (first show in a while), Moons and the long awaited return of comedic sensation Kev and Col. There will also be an acoustic showcase on the second stage featuring Zac Taylor, Jim Decatur, Billy Letendre, Shane Dog and others to be announced soon. Boston Jack Sparrow will be back, along with the Virgo A Go Go dancers. Facebook Event
Set times:
8:45 Shane Dog
9:00 Moons
9:35 Billy Letendre
9:50 Thick As Thieves
10:30 Surprise act
10:45 Kev and Col
11:10 Zac Taylor
11:25 3DT
12:05 Surprise act
12:20 The Motion Sick