In 2005, the BBC asserted that a “tool,” known as the the Hohle Fels phallus, dating back 28,000 years was perhaps the oldest phallic artifact on record. The story tells us that the Hohle Fels phallus was put on display in a special show at Blaubeuren prehistoric museum in an exhibition called Ice Art – Clearly Male.  Nudge, nudge, wink, wink, penis art is funny.  That’s basically what the Brits tell us here.

Why this fascination with depictions of the phallus, dating back, presumably, to the dawn of man?  I would love to posit a brilliant scientific explanation of genital evolution to better understand why we have interests in characteristics like size (see every single message in your e-mail spam box for details), but I don’t have one and I really haven’t read the very extensive literature on the topic (A randomly selected example: “Sexual selection and genital anatomy of male primates”).

What fascinates me most, in fact, is that I am not all that interested in the topic.  You could say okay, well, Mike, you’re also not interested in studying the migratory pattern of swallows (for which, the literature is also extensive), but I assert that the topic of genitalia and the visual depiction of male genitalia seems to fascinate most males at some point in their existences (perhaps one might argue that my point has arrived with this post).  Little kids (males primarily) draw penises, junior high males draw penises, high school males draw penises, college males definitely draw penises, and then, for the most part, the penis drawing comes to a screeching halt (probably because it becomes unacceptable, rather than the disappearance of the innate tendency – though I once again refrain from making a scientific assertion on the topic).  I have thought long and hard (pun intended) today and could not think of a single instance in which I ever drew a penis.  It’s possible that I am forgetting some grade-school prank or some nude figure drawing in one of my electrical engineering classes, but I can’t recall a single case.  I don’t bring this up to declare superiority (nor inferiority).  I even perhaps risk outing myself as abnormal somehow.  Some Freudian scholar might argue that I have some underlying phobia of genitals or some kind of ill-developed relationship with a relative, but I don’t believe in such things.  Regardless, I find the ways in which I differ from the norm, an interesting topic of examination.

Perhaps also interesting is my unscientific belief that the most likely culprits (or artists as I’d prefer to call them) are not the boisterous jocks nor the leather clad dirtbags (see The Breakfast Club for details about these cliques and how after a few hours together, they can fully empathize with the each other), but rather the pathetic, unpopular, physically underdeveloped males (of which I was/am one – see a perhaps more-intellectual-than-intended exploration of this topic in the film Superbad).

Musicians, and better yet even, touring musicians in indie rock bands, are perhaps most noteworthy for their awkward, irrational behaviors resulting from years of fitting into Anthony Michael Hall’s shoes more than Judd Nelson or Emilio Estevez’s shoes.  Their (and perhaps my) desire to get up on stage and wave frantically until people pay attention may stem from social inadequacies, mainstream rejection, or just plain boredom and loneliness.  There was certainly an ennui that plagued my younger life, at least running through my undergraduate college experience and I would cite this as a primary driving force in my musical endeavors. I stereotype indie rockers, who are primarily male, only because I hope to attribute their tendency to draw graffiti all over venue green rooms to their rejection of “appropriate” behavior and to their desire to grasp desperately and forcefully onto their fading youth.  There is scant research on what leads people toward a life of indie rocking, but there are a few examples of work delving into this topic and examining why indie rock is primarily male populated.  Excellent music blog, zed equals zee has also had several posts opening up discussions of women in music.  I think that, perhaps, if you pay attention there, you might find further future discussion on the degree to which the indie-rock climate, both locally and worldwide, is at least somewhat unfriendly toward women.  Until then, we’re stuck with mostly indie men and no solid explanation for the gender-involvement disparity!

All is not lost, however.  One resulting phenomenon of these male-dominated troupes, is their specific tendency not only to mark venue walls with their band names and their nuggets of wisdom, but also to draw images of penises in black marker. These aren’t anatomically accurate penises, they are penises mapped onto the most grotesque and bizarre aspects of their lives and their imaginations.  These could easily be viewed as offensive, but I would argue that they aren’t even intended to intimidate or offend, but rather to express the most painful insecurities that these folks carry with them on the road.

I include several examples here.  Please understand that there are potentially offensive components, but that I do not post this with offensive intent, but rather to further the understanding of the discussion above.  I find the 9/11 one most fascinating because I find its meaning and motivation quite baffling.  I decline to comment specifically on why one might draw a dog made of penises, a genital depiction of a genital plane crashing into the genital World Trade Center, or a marijuana leaf with penis fronds.  I leave that to you, my gentle readers. 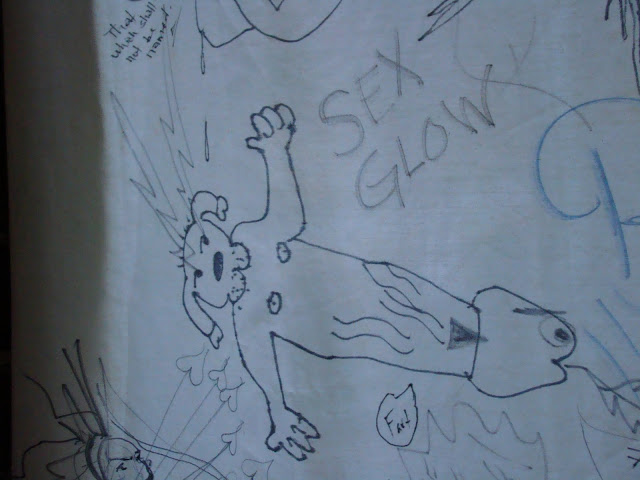 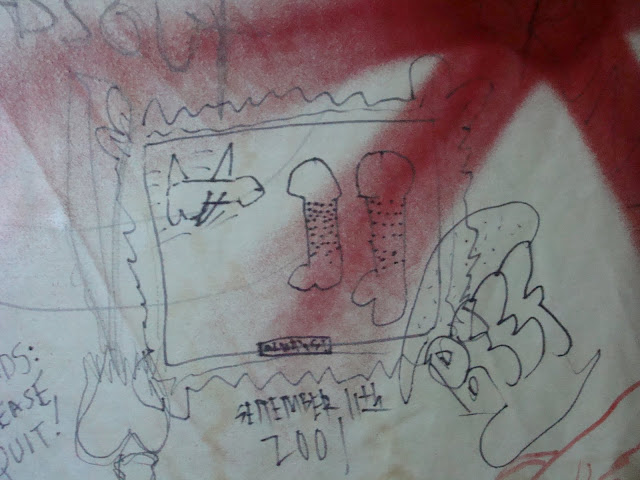 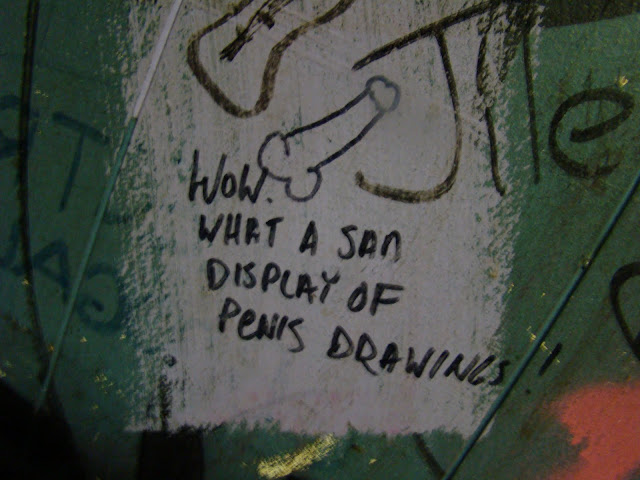 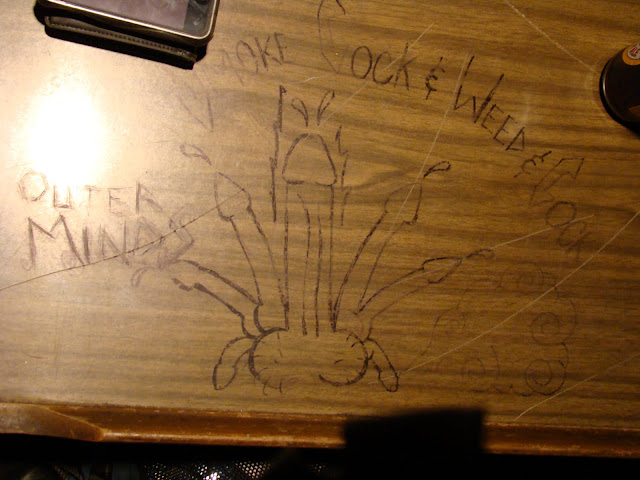 …and just to prove that I am not unfairly declaring myself innocent from phallic drawings, I did come up with this 3-legged skeleton from my 6th-grade sketchbook that Freudians would certainly assert is a little less than pure… 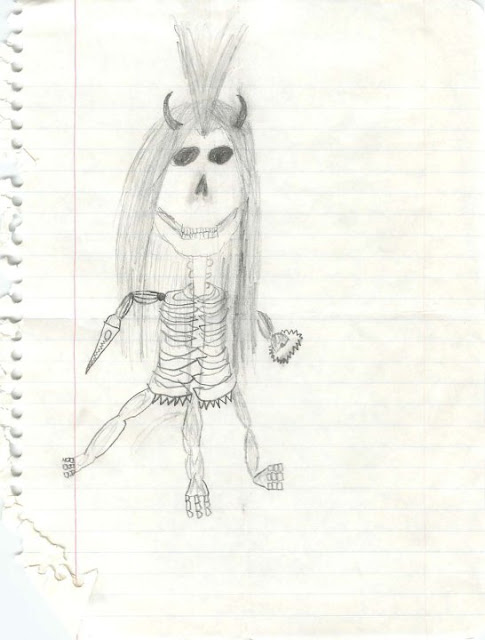 Finally, I will add that I am willing, for a large fee, to undertake a nationwide journey photographing phallic marker drawings in every city for some sort of coffee table book on the topic.  For a slightly smaller fee, I am willing to publish the contents of my elementary school sketchbooks.