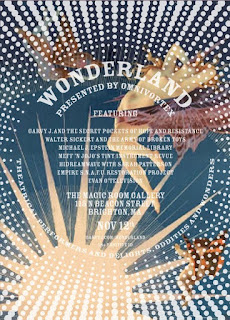 We had an absolute blast playing last Friday at The Magic Room Gallery and really want to thank everyone who helped put it together and all of the bands/acts/artists involved.  It was a beautiful variety show in a bizarrely beautiful space.

Last things first…or something. Here’s video of our whole set (posted at least for a little while). I was still recovering from the sickies, so singing was a bit of an adventure.  The low songs were hard to sing, the high songs were hard to sing.  The middle songs were hard to sing.  Luckily for me, the librarians all totally ruled and made up for any of my shortcomings.  I am often a little wary of light shows, but I loved the visual projections happening while we played (summary: I hate flashing/blinking; I love lasers.)!  We rushed to include a cover of Nick Cave and the Bad Seeds’ “The Weeping Song” in our set (video of our cover here).  I’d say we weren’t really well enough prepared to play it, so we fumbled it a bit here and there and I sang it all wacked-out, but I am leaving it here because I really love the idea of it.  The strange rhythmic clapping and viola part in the chorus make me think of flamenco music (though it doesn’t really quite sound like that).  Anyway, I like it and I am excited about working on the song more to make it awesome!

I wish I had more chance to record the other acts, but I was a little frazzled that night – a combination of having been sick all week and seeing too many clowns decorating the space (just kidding about the clowns bothering me…sort of. A clown did steal my Missile Command game at Chuck E Cheese once.)  Anyway, I got to witness almost all of it.

As you entered the magic of the Magic Room, you experienced the busking adventures of Meff ‘n Jojo’s Tiny Instrument Revue.  I was rushing around quite a bit at the time, so I only caught a few moments of their witty, tongue-in-cheek performance, but I look forward to catching more of it!  I just can’t argue with anyone that likes tiny instruments (ukuleles in particular!).  These are some tiny instrument photos from the later set with Walter Sickert and co.

Upon arrival in the room itself, the mind-altering imagery regressed me into a child…of a tiger…made of clay…with a rainbow hat…and two eyes made out of coal…or something.  Here are some pictures that might cause the same thing to happen to you (you’ve been warned!).

Okay, now that you’ve seen some frightening things (though few of the frightening clowns), on to the performers…

Walter Sickert and THe ARmy of BRoken TOys pulled off what I can only do no justice by describing as a set accompanied by a troupe performing a bit of Alice-in-Wonderland-meets-insane-asylum theater.  I didn’t get to see the whole thing, but what I saw was really awesome and I hear rumors that it was recorded.  If I ever get word of public video, I will add it to this post!


Garvy J. and the Secret Pockets of Hope and Resistance rocked the night out and I did manage to get a couple of videos of the early part of their set before my battery died!