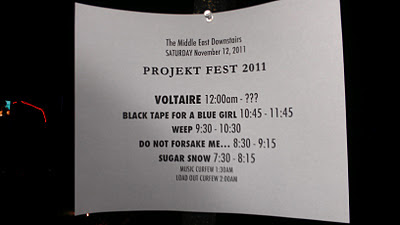 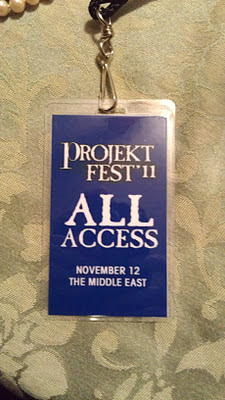 This past weekend, Do Not Forsake Me Oh My Darling played a superfun show as part of Projektfest 2011. Projekt is a specialty record label for “darkwave” music that has been around for 28 years. Projektfest is a sort of yearly celebration of the label. As is my wont, I got some video footage of all of the acts of the night (and I will attempt to link to others’ footage as well).

Voltaire (video 2, video 3) – played raunchy and hilarious (Who knew so many puns/jokes could come from the concept of a zombie prostitute?) dark cabaret songs with his exceptional backing band, This Way to the Egress.

…and the final (in reverse order of the night) of the Projekt bands, Weep (led by Doc Hammer of The Venture Bros. TV show) –video 2, video 3, video 4 (The Cult cover).  Weep, in addition to being really awesome, played some quite unexpected covers. In addition to the Cult song posted here, they did a ripping version of Bauhaus’ “The Passion of Lovers” (Matthew Griffin got video of that!) and Rihanna’s “Shut Up and Drive.”

DNFMOMD – we got to play a set that included burlesque by Porcelain Dalya and Maggie, performed to our song “Episode 11: It’s Your Funeral.” They really brought the song to life with a ticking live bomb under a trenchcoat!

Watch the video-from Matthew Griffin below! (here’s our side-stage video also with Episode 9: A.B.andC. – and a third angle by Karmic Photography):

Sugar Snow got the whole ball rolling with their excellent dreamy pop:

DJ Matthew Griffin spun the tunes in between band sets – he posted his playlist on facebook –  and watch his Youtube page for more videos – including crowd angle on “It’s Your Funeral” and our cover of Leonard Cohen’s “First We Take Manhattan!”

…and Jesse Nicole got a bunch of video and photos being posted on her Karmic Photography page – link to her Projekt folder.

Special thanks to Anderson Mar of Dark Sky Productions for putting the whole thing together and having us play!