WHY WHAT THESE VEGANS EAT? I’m tired of people asking me what Mike and I eat. Would an omnivore have an easy time answering this question? Mostly, we eat vegetables/grains/legumes/fruit. I cook everything I can in my trusty cast-iron pan. I tend to lean towards stick-to-your-ribs one pot meals that come together in about a half an hour. We’re trying to be good and eat more salad. Once a week, I’m going to post about all of the dinners I made the week previous-hopefully it will clear up any lingering questions. 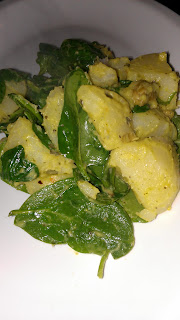 Warm Spinach Potato Salad from Dreena Burton – I omitted the pine nuts but was still tasty. 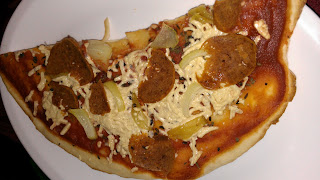 Pizza! my crust never quite rose properly but ended up pretty good as a thin crust. I made the veggeroni from Fat Free Vegan and used it throughout the week. Best attempt I’ve had making seitan yet – sliced it up super thin in the food processor. 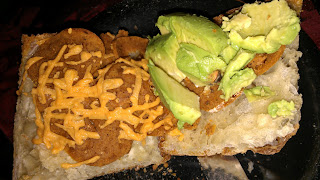 sandwich with home made veggeroni, daiya cheddar, avacado on an iggy’s baguette. 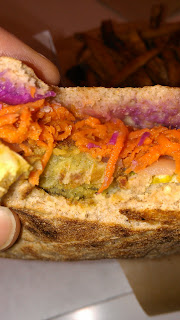 A half eaten chickpea fritter from Clover – we’ve been ending up there a fair amount late at night as it’s one of the only places to grab something delicious right up until midnight every night!

this week’s box from Boston Organics 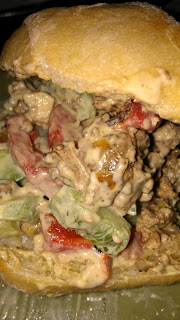 Marinated Tofu Sandwich – a little messy but pretty good and in the bowl: pureed broccolli and carrot soup! 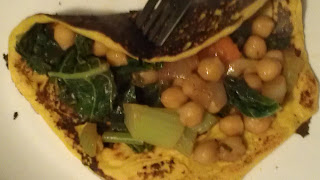 chickpea savory crepe from the Candle 79 cookbook, made with chickpea flour – was an awesome wrap for veggie scramble (kale, chickpeas, tomato, celery flash cooked with some bullion.)