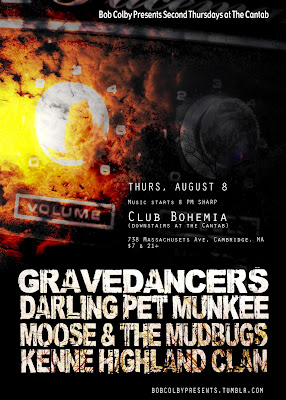 $7/21+
GRAVEDANCERS are a new band with old-school roots in bands as diverse as Harlequin (Matt Gilbert and Reno Daly) and The Lemonheads (where Donald McBride did a stint as touring drummer). Matt Gilbert namechecks both Mott The Hoople and Alice Cooper as influences, but I’m hearing other elements as well
http://www.youtube.com/watch?v=5PPU6L3z4EI

Formed from two parts (Sophia Cacciola and Michael J. Epstein) Do Not Forsake Me Oh My Darling and one part (ace guitar-slinger Catherine Capozzi) Axemunkee, DARLING PET MUNKEE are on a garage-fueled mission to illuminate the secret lives of every product ever advertised in vintage comic books. Speaking of vintage, they also enjoy giving audiences their own take on tunes such as The Cramps’ “Zombie Dance” and Vince Taylor’s “Brand New Cadillac”.
http://donotforsake.com/dpm

Ed “Moose” Savage of MOOSE & THE MUDBUGS is a local legend and a performer unlike anything you’ve ever seen, and his songs are just as original – hilarious and brilliant takes on subjects no one else would think of putting in a song (“Iceburg Lettuce”), or do proper justice to. If you saw him at BC60 in August of 2012 (or at my Rosebud show last March), you know what I mean.
http://www.edmoosesavage.com/

Speaking of local legends, KENNE HIGHLAND CLAN consists of four people who have helped define the concept and sound of Boston garage rock. Before coming to Boston, Kenne Highland’s band The Gizmos produced one of the very first DIY releases of the ’70s explosion, and since he’s been in Boston he’s been in more bands than I have space to list (but check the linked interview), accompanied by a varied crew that often includes long-term associates/current bandmates Jody Moore, MJ Quirk, and Matt Burns.
http://jojofiles.blogspot.com/2010/01/bostonians-interview-24-kenne-highland.html