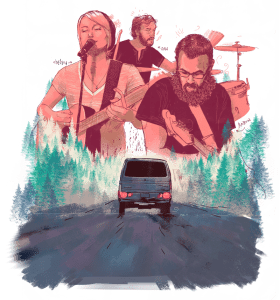 The Motion Sick’s “30 Lives” is featured in the film, The Anchorite!

Stubborn guitarist Aaron Black finds himself unceremoniously ejected from his band and takes revenge by hijacking the tour. But when his manager insists he take on Chelsea as an opening act, Aaron’s got to make nice. Eventually joined by Aaron’s estranged high school best friend Dan the Drummer, the 3 musicians travel the country becoming not just a band, but a family.