Our EP was officially released on April 3rd at Church of Boston (with some wonderful bands – another post on that soon!) and we really felt the love from the Boston community leading up to the show. Here’s the run-down on what people posted and had to say: 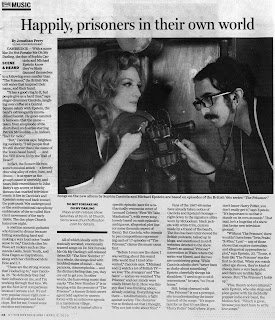 Jonathan Perry of the Boston Globe (link to article) sat down with us and wrote up an really in-depth analysis of the band, ““The twosome’s musical attack — a fiercely churning alloy of voice, bass, and drums — is as spare as the group’s name is unwieldy, and bears little resemblance to John Barry’s spy scores or kitschy themes that marked television adventure of that era. If there is an overtly retro element to the music, it lies in Cacciola’s and Epstein’s noisy nod back toward the post-punk ’80s underground or the confrontational cacophony emblematic of the so-called Riot Grrrl movement of the early 1990s….As a whole, the songs deal with troubled states of mind — fear, paranoia, claustrophobia — and the distinct feeling that, yes, they are out to get you.” 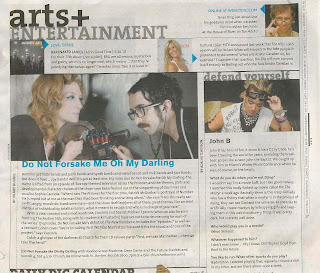 Hilary Hughes at The Weekly Dig (link to article) wrote up our concept: “Boston’s got indie bands and punk bands and synth bands and metal bands and rock bands and jazz bands, but does it have … spy bands? Well, it’s got at least one: big noise duo Do Not Forsake Me Oh My Darling. The name is lifted from an episode of ’60s spy-themed television series The Prisoner…With a clear concept and a mod wardrobe, Cacciola and bassist Michael Epstein (who can also be seen fronting The Motion Sick, along with his trademark mustache) have set out to write one song for each of the series’ 17 episodes….Catch a glimpse of the darkness at Church for their CD release party: “First, we take Manhattan … then we take the Fens!!”

Zed Equals Zee said, “Their music is loud, minimal (just drums, bass and vox), and angry. Themed off the TV series The Prisoner, their music and lyrics deal with similar themes of alienation and totalitarianism. Despite all that, their songs are inexplicably catchy (occasionally dangerously catchy, as I found myself singing/yelling along to “Gun gun gunning for you!’ as I drove on the interstate).”

TeaParty Boston reviewed the EP, “Cacciola’s voice has the raspy, weary yet ready for onslaught sound of Kim Gordon throughout the album. The first song, “Episode 1: Arrival,” is like being plunked down in a car chase scene at right at the beginning of a movie, where you’re still working to figure out who the baddies are, as Cacciola sings, “Gun-gun-gunnin’ for you.”

Musings from Boston said, “Pleasantly pummeling and hypnotic, the duo of Sophia Cacciola (on vocals and drums and Mike Epstein on bass, whip up quite a churning racket.”

Playground Boston did a ticket giveaway and Boston Band Crush had me send in a few words on the night of music and Cheap Thrills recommended the night, “rock and rocky horror”

We were also honored to be a guest on WZLX’s Boston Emissions, where we chatted about the EP, gave away tickets to the show, and played an acoustic version of “Episode 4: The Chimes of Big Ben” – Link to the show