Last year, Sophia, Brendan Boogie, and I put together two nights of comedy and music intertwined as a special back-to-school weekend called “What’s Your Major?”  To promote that show, Brendan and I (with the help of Sophia as camera person) broke the world record for most colleges busked at in a single day (see video here).  This year, we’re doing it all again, but we’ve streamlined the show down to one amazing night of killer music and comedy; a night so intense that you may not even be able to make it to class on Monday.

Also, in order to celebrate this year’s event, we quizzed participants to see how much they remembered of their college experience by asking them questions about their majors. Sophia manages to pass her quiz on Modern Physics with flying colors. Some of the other folks…well, you’ll just have to watch: 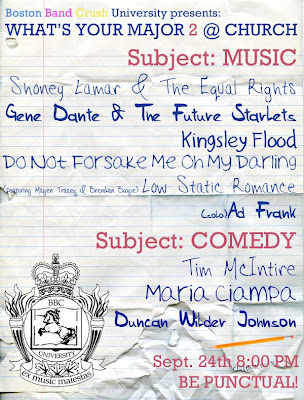