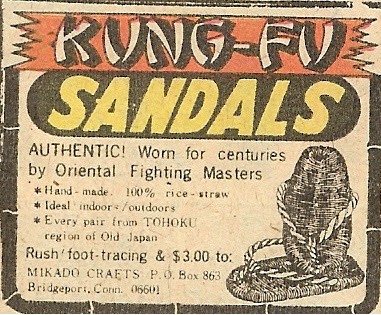 We present to you – Kung-Fu Sandals – the final story and song of Darling Pet Munkee‘s debut EP, Glows in the Dark! (Other stories here.)

While it was virtually impossible to track down any stories or examples of actual Kung-Fu Sandals ordered via this particular ad, it appears that they are simply a standard rice-straw sandal available as a common item.

While the sandals themselves are an unremarkable item, there are a few fascinating nuggets here. While its precise origins are unclear, Kung Fu is most definitely known specifically as a Chinese martial art (as opposed to Karate, which is widely regarded as the common Japanese martial art). Thus, it is, at the very least, odd that Kung-Fu Sandals should originate in Japan (and make their way to you via a retailer in Bridgeport, Connecticut).

They are ideal for indoors/outdoors. Hmmm…

The idea that some kid could buy some sandals from Japan and use those to channel martial arts that would otherwise need to be learned through extensive training is stylistically typical of the comic-books ads we’ve explored in the whole DPM series. They are all based on selling something too good to be true – a shortcut to skills, powers, mystifying creatures, and just general advantages over others.

Kung-Fu Sandals are a perfect example of the objectification, exotification, and appropriation of Asian culture. I won’t write an essay on the topic here, but it’s clear that the Kung-Fu Sandals play to the ridiculous stereotype that the people of Asia are all highly skilled fighters – a stereotype perpetuated within the comic-book literature of the time (and probably still today).

In writing the song “Kung-Fu Sandals,” we elected to include the “Oriental Riff” while not including any other aspects of Chinese or Japanese music to match the contextual exotification (some may say racism) of the item. The implication is that by simply including this motif (these four pentatonic-scale notes), we trivially evoke Asian culture through the lens of American dramatization.

Really interesting audio piece on the origin of the riff from NPR at: http://www.npr.org/blogs/codeswitch/2014/08/28/338622840/how-the-kung-fu-fighting-melody-came-to-represent-asia