We bring you another entry in our continuing series on the Dolphinspiracy/Dolphinpocalypse of 2012. As the dolphins move closer and closer every day toward the destruction of humanity, we continue our fight on the space front. I can now reveal the classified information that The Michael J. Epstein Memorial Library leads Earth’s army against the alien dolphins’ space assault.

Few people realize that Dick Clark was not only the face of countless media entities, but was also a staunch human supporter in the battle with the dolphin invaders. Here below, Mr, Clark shows his commitment to the LAND part of the U.S. in this pro-land-creature support television fundraiser special. 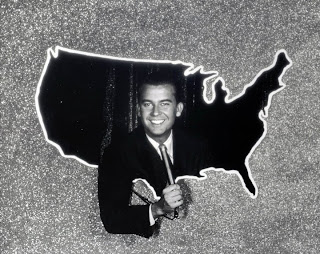 In recent years, however, his support had already been compromised by known dolphin-supporter Ryan Seacrest. SEA-CREST!  Just look above at what appears on his website at this very moment!!!

Ryan is long affiliated with dolphin co-conspirators. He serves as the executive producer of a show featuring the dolphin-loving Kim Kardashian. Here she is with two different dolphins:

A few years ago, Ryan was, unsurprisingly, attacked by a shark (more) one of our few allies in this war.

Ryan Seacrest is an anagram of “Scare Nets Ray” – Rays of course, are closely related to sharks and are another known enemy of dolphin invaders.
I hope the authorities plan to take another look at Dick Clark’s “heart attack.”