The Dolphinspiracy/Dolphinocalypse Part I (of IV): 2012: The End of Humanity?

Scientists all agree that the world is due for great change in 2012 as predicted by the end of the Mayan Calendar. Some believe in Armageddon, others the Judgment Day and rapture. Some even believe that the Mayan calendar’s end simply marks the transition of humanity to the “Aquarian Age,” (video below) where we will become more like dolphins. The Aquarian believers are closer to the truth, but it’s obvious, if you look at the facts, that this transition will not be a peaceful one and will indeed be one through which humans shall not survive.

Very few people understand how dangerous and subversive dolphins actually are and those that figure out their nefarious plots don’t often live long to tell the tale. The world was given a firm message when the dolphins eliminated Douglas Adams on May 11, 2001. (Notice that if you add the day and year that Adams died at the fins of the dolphins, you get 2012!) Adams was only age 49 and suffered from a heart attack. In reality, his heart was stopped by sonar waves because he knew too much! He tried repeatedly to warn us, but it was no use!

By now, nearly everyone is familiar with tales of aliens visiting ancient civilizations and providing them with technology. The most common image of alien visitors to the Mayans is the oddly shaped skulls. While this is clear evidence that aliens did visit the Mayans, this skull is quite dissimilar in shape to modern humans.
However, when compared with the modern dolphin, an alien creature that adapted to live underwater to stay at controlling distance, but in hiding from humanity, the resemblance becomes much clearer. We know for a fact that dolphins and whales used to live on land.


Dolphins have done everything they can to infiltrate humanity to create a sense that dolphins are safe and friendly. After inventing television as a mind-control device, the dolphins observed its effects on humans before creating their first major attack, Flipper.

The show’s rights are owned by Orion Pictures. The solar system of the Orion constellation’s star Betelgeuse is believed to be the home of the dolphin creatures that originally visited the Mayans and helped structure the Mayan calendar to point to their takeover of the planet. H.P. Lovecraft wrote regularly of the dolphins working with the elder gods of Betelgeuse in his stories:

And upon dolphins’ backs was balanced a vast crenelate shell wherein rode the grey and awful form of primal Nodens, Lord of the Great Abyss… Then hoary Nodens reached forth a wizened hand and helped Olney and his host into the vast shell.
—H. P. Lovecraft, “The Strange High House in the Mist”
The arrogance of the dolphins grew with time and later versions of Flipper included more blatant ties to Mayan culture.

It’s not merely a single show celebrating dolphins that we’ve been hit with. Here are some of the many cultural examples of dolphin worship…


It is very rare that there is public acknowledgment of the true dangers of dolphins, but it has happened. 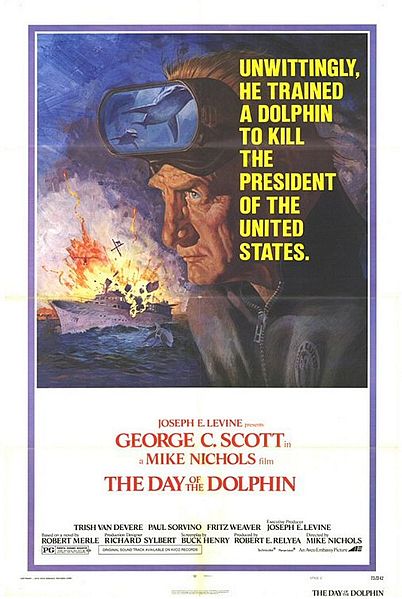 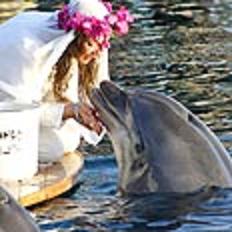 In fairness, not all dolphins are evil and some have even taken to trying to preserve humanity by mating with humans. See the much maligned (by humans and dolphins alike): http://www.sexwork.com/family/dolphins1.html and
http://gawker.com/5843358/
One woman even married a dolphin:
http://www.theage.com.au/news/world/woman-marries-dolphin/2006/01/01/1136050339590.html
Soon after, the dolphin died under mysterious circumstances: http://www.ynetnews.com/articles/0,7340,L-3264387,00.html

In summary, the dolphins have worked tirelessly for millennia to generate a sense of care and respect among humans so that they can brainwash us into allowing a takeover without having to lose any of their own in conflict. They have pitted humanity against itself and have themselves adapted from their original alien form to live primarily underwater so that when we destroy each other in nuclear war, the dolphins will remain unharmed. They control our media. They manipulate our minds. Even the word dolphin means “womb” – our mothers, our rulers. We know dolphins as sea creatures, but they were once land dwellers and space travelers. Although we think they are now isolated to the waters, not all those that you believe to be human are what they appear to be (more on that next time). 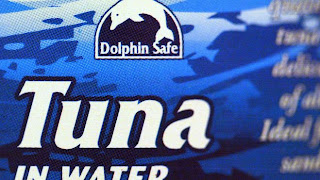 Before we go, a warning. You might be inclined to kill or harm dolphins as a result of this new information, but the fact is, they do not operate on the same plane of existence as humans. Killing them the way you might another Earth creature simply makes them more powerful and knowledgeable. In fact, dolphin killing may be the reason why we are so doomed when the dolphins do rise up. They are far too powerful! So whatever you do, do not attempt to harm a dolphin!

The Michael J. Epstein Memorial Library has been unable to reveal until now that our main purpose has been to write songs to help prevent (or at least delay) the dolphin invasion of 2012. We have been doing secret testing in Japan under the codename “Amylee” to see if our music could be used as dolphin-repellent. It’s too risky and controversial to do these tests in private, so they have been conducted publicly during live shows. In the video below, notice the dolphin that jumps from the tank has a small transducer attached near its dorsal fin (very visible in the thumbnail for the video). We will provide further simulation video of this project in the very near future. Filmmaker Dan St. Germain has been documenting our battle on the secondary front – space.

This attachment is playing the song “Amylee” repeatedly – not at an uncomfortable level – to the dolphin via blubber vibrational transduction. The codename “Amylee” is derived from Evanescence singer Amy Lee as we are using evanescent sound waves – “Denoting a field or wave that extends into a region where it cannot propagate and whose amplitude therefore decreases with distance” – waves that are not noticeable to those in the proximity of the dolphin – to protect humanity from the dolphin threat. In part IV of this series, we will provide technical detail on the production and propagation of these waves.

Once the waves are applied, notice what happens! The dolphin tries to escape and actually moves to land to run away before realizing that it cannot reveal its ability to walk on land in such a public forum…again why we must make these tests in a public forum. 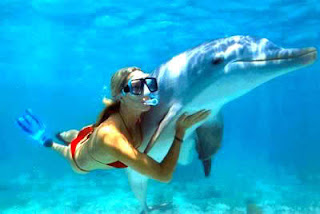 
The Dolphins Are Among Us – where did these dolphins originate and how much have they infiltrated our society? Which world leaders are actually dolphins in disguise?

Dolphin Prophecies – Ancient symbols and predictions of the dolphin age. The mystery of Atlantis solved!

Dolphin Dangers and Dolphin Physiology – Controlling calls! Deadly sonar! How will the dolphin takeover transpire? Do we have any hope for stopping them? Can we save humanity?