Last night Sophia won Best Female Vocalist 2012 from the Boston Phoenix for her work in Do Not Forsake Me Oh My Darling! Thanks so much to our friends and fans and everyone at the Boston Phoenix! It is such a huge honor and Sophia couldn’t be more thrilled! 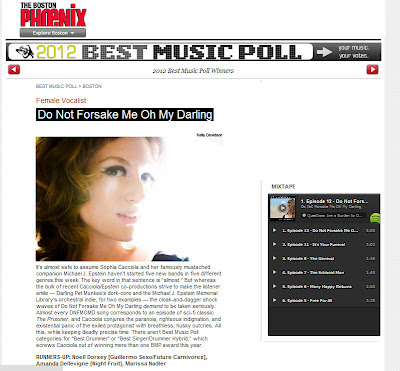 “It’s almost safe to assume Sophia Cacciola and her famously mustached companion Michael J. Epstein haven’t started five new bands in five different genres this week. The key word in that sentence is “almost.” But whereas the bulk of recent Cacciola/Epstein co-productions strive to make the listener smile — Darling Pet Munkee’s dork-core and the Michael J. Epstein Memorial Library’s orchestral indie, for two examples — the cloak-and-dagger shock waves of Do Not Forsake Me Oh My Darling demand to be taken seriously. Almost every DNFMOMD song corresponds to an episode of sci-fi classic The Prisoner, and Cacciola conjures the paranoia, righteous indignation, and existential panic of the exiled protagonist with breathless, husky outcries. All this, while keeping deadly precise time. There aren’t Best Music Poll categories for “Best Drummer” or “Best Singer/Drummer Hybrid,” which screws Cacciola out of winning more than one BMP award this year.” – Barry Thompson, The Phoenix 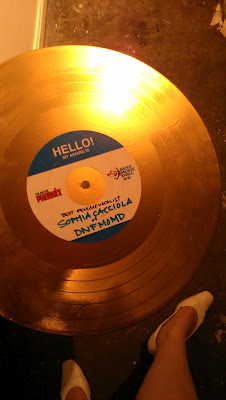 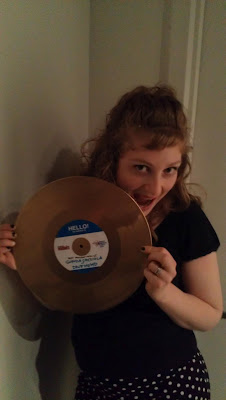 more official photos from the Phoenix!
moments after winning
in front of banner