We had a grand world premiere of Magnetic at The Boston Underground Film Festival!
3/29/15 at 12 PM at The Brattle Theatre. 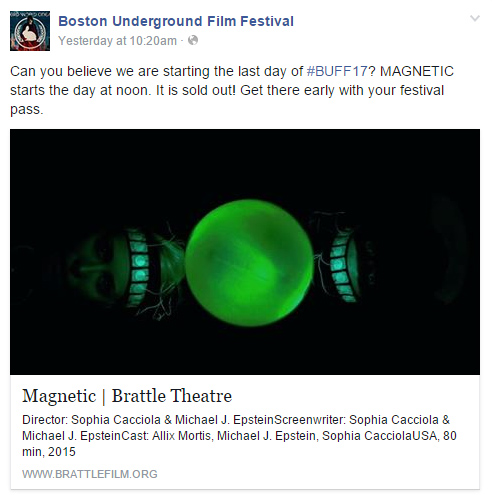 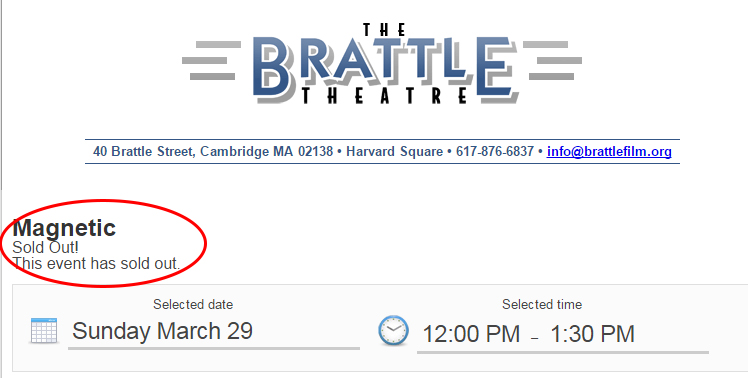 We’re also excited that films we helped out on in some capacity are also showing at BUFF. Check out the Homegrown Horror shorts program featuring One and Penta! …and Postpartum playing with the feature Excess Flesh!
Do you believe in consciousness? For the past year plus, we have given almost all of our creative energy to making Magnetic, a weirdo sci-fi movie about the arbitrary valuation of (true or illusory) existence and consciousness over non-existence – and other meaningless dichotomies…It’s also about multiverses, the different paths our lives could take with just small changes in circumstance, Alice in Wonderland, and synth pop.

From the BUFF writeup:
You’re more than likely to glean something vastly different than the person next to you throughout this locally-harvested, analog sci-fi romp towards self-discovery. Or the discovery of selves. Or something. Musicians-cum-filmmakers Sophia Cacciola and Michael J. Epstein have created a tale just as ambitious and beautiful as it is perplexing and infuriating. Stuck somewhere between end-of-the-world verisimilitude and ambiguity,Magnetic will draw you in—but you may never quite be sure just how or why.

Alice (Allix Mortis), a Lisbeth Salander-ish heroine, flees New York City for a frozen rural homestead where the sheep are plenty. She has a terribly shitty job where she calls the town’s parents to let them know their child is dead and from which morgue they can retrieve the bodies. She is also the only person who still has the power to dream.

There are also several Alices, many closeup shots of Alice’s eye, a Tesla coil, and an all-female sect of Ra worshippers who share the sartorial sensibilities of another cult with an Egyptian-sounding name.

A lot going on, perhaps, but just let the film do it’s thing. Much ofMagnetic operates as an extended music video, each full track lamenting confusion, loneliness, and ennui in a way dialogue cannot. The [f**king phenomenal] throwback electro soundtrack is the emotional core of the film, admitting what Alice refuses to feel. It is both her foil and her truth.

Magnetic is a love letter to our need for purpose and belonging, to the circuitry that binds us to ourselves and others—and to rotary phones, cassette tapes, and the sound of sweet, sweet synthpop. But you’ll probably think it was about something else entirely.
– Melinda Green

Trailers of all of the BUFF features!