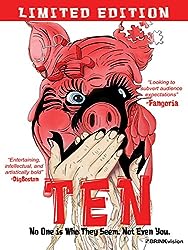 TEN is now streaming for free to Amazon Prime members! Check it out!

And then don’t forget to grab one of the few remaining physical copies of the TEN companion novel by Jade Sylvan!

(Once we run out, it probably won’t be reprinted, but will continue to be available in ebook form.)
“As well as an incisive piece of social commentary, Ten is also a highly entertaining horror film with a distinct aesthetic….The ultimate revelation behind the events is as incredibly simple as it is joyfully ridiculous, and perfectly fits both the slasher plot and the observations on women’s defined societal roles. Ten might be fun and gory, but it also manages to think a little along the way.” – Andrew Marshall, Starburst Magazine

“TEN is up to something a little different, looking to subvert audience expectations…and while TEN contains the scenario’s requisite blood and nudity, it veers off in directions you likely won’t see coming, both in narrative terms and in the way it explores questions of female identity.” – Michael Gingold, Fangoria, Issue #335