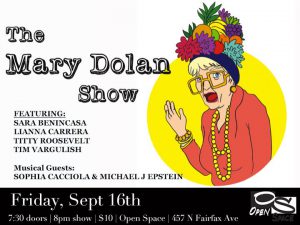 We’re very excited to be playing a few songs and being interviewed at The Mary Dolan comedy show! It’s our first appearance since moving to Los Angeles!

Plus co-hosting by Reggie the Puppet!!

Doors at 7:30pm/show at 8pm. Tickets are $10 cash at the door, and parking is kind of a bitch, so get your life together and get over there early or take a Lyft or handy pedicycle!
—
The Mary Dolan Show, hosted by outrageous 86-year-old ex-vaudevillian Mary Dolan is an irreverent and surprising twist on the live comedy format. Combining top-notch stand-ups, music, surprise acts, and Johnny Carson style interviews, Mary brings the audience on a ride “if for nothing else than to get their money’s worth!” Called “heroic defiance of good taste” by Boston’s Weekly Dig, The Mary Dolan Show is now LA’s weirdest, wildest live monthly show! Every third Friday at Open Space!