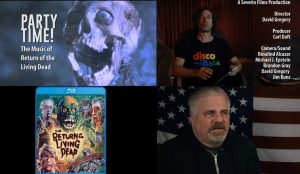 Sophia and Michael had the pleasure of interviewing John Sox (of The F.U.’s and Straw Dogs) last year for The Return of the Living Dead collector’s edition blu ray bonus featurette Party Time! The Music of Return of the Living Dead. The Straw Dogs song “Young, Fast Iranians” appears in the film as the radio track at the introduction of the gang of punks, a pretty iconic moment in the film. While only a portion of our interview made it into the final film, John was kind enough to give us some time to talk about how his song made its way into the film, the satirical portrayal of both the military and punk culture in the film, and how a song about kids indoctrinated as suicide bombers is sadly still very relevant today, 30+ years after it was written.