Back in the 1990s, I was pretty heavily involved in collage music, particularly doing live collage radio at WHRW with the radio show Free Uncensored under the DJ name M-sli©k da ninjA, which started out as a joke name, but stuck around somehow. I was involved in projects like The Droplift Project (it was illegal to sell records with samples, so the ninjA and others just dropped them on the shelves in stores and let people find them) and Dictionaraoke (karaoke performed by talking dictionary voices).

There were many of us on Usenet and mailing lists involved in this sort of nonsense. We'd regularly try to do collaborative projects. I wanted to do a recreation of Beethoven's 9th Symphony by assigning small segments to different artists and having them recreate their segment with no knowledge about the surrounding segment approaches.

People got excited! I assigned out all of the parts and waited...some tracks came back. Many didn't. I reassigned the ones that didn't. Same. Rinse. Repeat. Rinse. Repeat. After about 5 years of chasing down contributors and waiting months for them to return their work, I kind of abandoned the project.

It sat around for more than 15 years half finished. Now, in 2017, I decided it was time to pull it off the shelf, finish it myself, and put the thing out for fun! So, here it is, Beethoven's 9th Symphony recreated by many different artists! 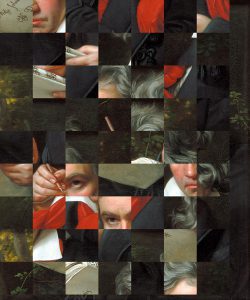