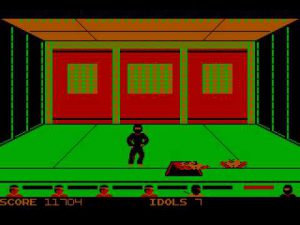 Back in the 90s, I used to do a lot of sound collage work under the name M-sli©k da ninjA. The project started as a radio show on WHRW inspired by Ken’s Last Ever Radio Extravaganza and Over the Edge (and the associated Negativland).

Before long, it spiraled out of control and the spirit of the ninjA took over the bodies of the innocent. With the help of Shinobi Tom and others, sounds and songs were sliced up and put back together faster than you can say katana.

As you all know, sampling and creating music from samples is illegal. Well, the ninjA fell in with the wrong people and got involved in projects like The Droplift Project (it was illegal to sell records with samples, so the ninjA and others just dropped them on the shelves in stores and let people find them) and Dictionaraoke (karaoke performed by talking dictionary voices). Then the ninjA got involved in a project so sinister that the forces of good banded together to stop him (or is the ninjA a her?). The ninjA attempted to split Beethoven’s 9th Symphony into tiny segments, distribute those segments to different artists to recreate, then stitch the whole thing back together. The project was shut down by the authorities (but is now out!) and the ninjA went into hiding. While the ninjA respects religion and spiritualism deeply, there were also rumors that certain religious leaders fought the ninjA’s attempts to expose their hypocrisy and to bring forth the secret lives they live. 10 years later, the ninjA is back and this time, no one can stop him…

The ninjA hopes to digitize and post some radio work soon, but until then, here is a collection of the work of the ninjA, Aphorisms on Aphonia and Aphasia: Your Cure For Aphagia (A Collection of 39 Works 1994 – 2000).

There was also a collaborative project to recreate Beethoven’s 9th Symphony that I organized.