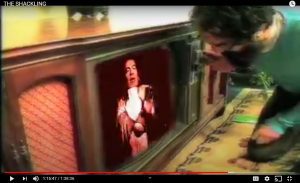 Michael appears as one half of the "couch TV couple" with Geena Matuson in Reel Groovy Films' John Hartman's The Shackling. 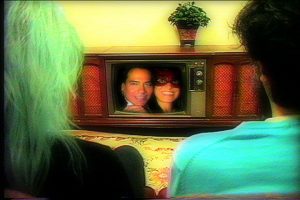 Possibly the only Super VHS feature film being released in the world, in 2020. Synopsis: During the mid 80's, an egotistical runway model goes into a coma, and may never return unless he can navigate the karmic state, known as THE SHACKLING. The footage is entirely analog -- mostly Super VHS, with some regular VHS and super 8 celluloid film. Filming began in 2015, with the notion of making a simple, short film. But it was recorded in such an eclectic way, it could have morphed into many different forms of expression. The only thing that was scripted, originally, was the cat walk. All the other scenes were only suppose to provide short fillers for the catwalk scene, as folks switched the channels, only to discover that the catwalk shooting was on every channel -- and the only thing that mattered in the Universe was that "Victor Has Been Shot.' But we had so much fun recording the other scenes, that they developed into more than mere snippets. Many of them took on back stories of their own -- that rendered THE SHACKLING into a lengthy feature. And here we are, five years hence.

Synopsis: An egotistical runway model goes into a coma, and may never return unless he can navigate the karmic state, known as THE SHACKLING. Originally Known as, 'Victor Has Been Shot,' THE SHACKLING is a sister project of the RETRO TUBE.