This week’s edition of Rock Beat is, sadly, very slim. Sophia’s Rock Beat happens every Monday and is a repository for all of the video of local Boston bands I saw the week before. Previous Rock Beats are here.

This week was the week of The Michael J. Epstein Memorial Library (a band that I drum for) – as our CD release was on Saturday. As such, much of the week was devoted to preparations for our sold-out Middle East Downstairs show. Wednesday, we played on On The Town with Mikey Dee – an awesome local radio show on Tufts college station, WMFO – I believe our performance is still up for a few more days – wmfo.org. Saturday’s release was an amazing experience and we are so thankful to everyone that made it such an epic success. There were memorable performances from Ryan Schmidt, Endway, and McAlister Drive but I was too flustered to remember to tape any of their sets! I believe more video from the audience will be popping up in the next few days – but here’s our song, Stranger, as taped from our camera that we left on top of the speaker! 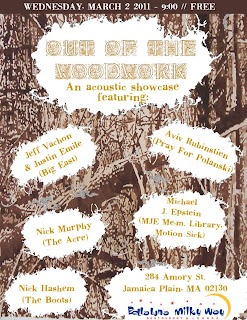 On the schedule for this week:

Wednesday, March 2nd – Michael J. Epstein is playing a solo set at The Milky Way. We may play a couple of Space Balloons songs and some of the MJEML librarians may be joining him on some songs.

also, the pizza at The Milky Way is awesome.
Thursday – Do Not Forsake Me Oh My Darling is tracking bass and vocals for our next 7-song EP at The Moontower in Q Division – so excited to get back to this material (we tracked drums over Christmas).
Friday, Tijuana Sweetheart is playing with Peelander Z at Church
Saturday, Eksi Ekso is releasing a new CD at Great Scott