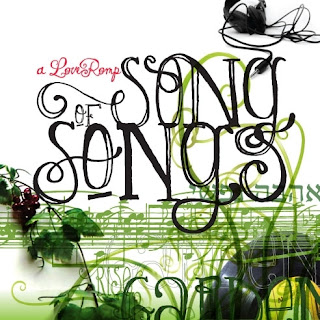 I already wrote a little bit about Song of Songs: A Love Romp before the opening nights when The Michael J. Epstein Memorial Library played the opening slot, but now, having spent some time with the music and having seen the show, I thought I’d give a little more of a plug for it.  The show’s run continues on 6/9-12 and 6/16-18 (with a special Q&A session on the 12th).

The songs and the story are based on the Biblical “poems” of Song of Songs and the lyrics are built around specific lines of that poetry applied to a journey through understand types and facets of love. The songs are interesting mappings of the text onto modern indie pop/rock. I am particularly fond of “He’ll Be Mine (and I’ll Be His),” which, with its great delivery by Hayley Jane, reminds me of some of Jenny Lewis’ solo work (or early Rilo Kiley). All of the singers did an excellent job at the show (and on the record), but Hayley’s voice is really exceptionally phenomenal and I look forward to checking out her band Hayley Jane and the Primates sometime soon.

Give a listen to the music:

There are also the original demos.

There was also a great piece on WBUR talking about the show with some samples from the song recordings.

So, even though the MJEML won’t be opening anymore, you’ve got two more weekends to check out the show.  I’d suggest reading the Song of Songs first for some context and getting yourself some tickets!

Seeing this also reinforced my longstanding interest in writing a musical.  I’ve already got most of a plot scripted.  Who can say? Perhaps it will be the next MJEML project.