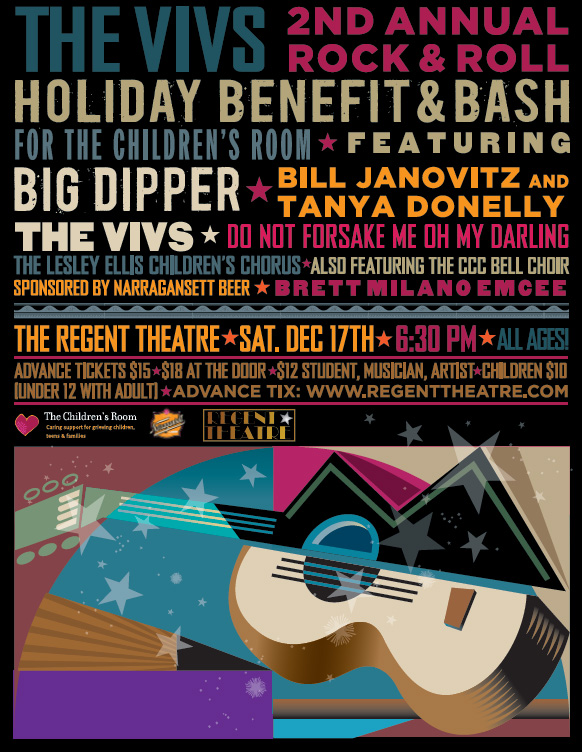 Featuring An All-Star Lineup of Bands and Performers:

To benefit The Children’s Room in Arlington, a center for grieving children and their families; serving over 50 communities in Greater Boston

Boston area power pop quintet The Vivs are delighted to host the 2nd Annual Holiday Bash and Benefit for The Children’s Room. All ages welcome!

They say that if George Harrison, Alex Chilton, and Patti Smith had a three-way lovechild, she would be The Vivs. This Boston-based rock band plays driving, smart, and hooky post-punk/power pop. The Boston Globe hailed their 2009 CD Mouth to Mouth as “terrifically nervy; riff-charged, and sharpshooter sure” and named it a top ten of the year. Blurt Magazine called the band “impossible not to fall for,” naming them a “Best Kept Secret” poised for big things. To The Vivs, this show is a big thing; it’s their second year doing this benefit for The Children’s Room, an organization near and dear to them. Though fresh off the release of a new EP and sold-out release show, The Vivs don’t play out much. Come catch them in this great setting!

Big Dipper is a Boston power pop/ rock band with a 25 year history. Although their music is in two new films, Losers Take All and I Melt With You, and a new album is due out early next year, they are very choosy about gigs. This is the first and only official show since 2008’s appearance with Robert Pollard’s (Guided by Voices) Boston Spaceships.

Two of Boston’s finest purveyors of alternative rock in a special set together. Tanya Donelly had a founding role in influential bands Throwing Muses, The Breeders, and Grammy-nominated Belly – as well as a solo career. Bill Janovitz is co-founder and singer/guitarist of Boston’s Buffalo Tom. One of the most heralded bands to come out of Boston in the 90s, BT’s excellent songwriting and raw-powered delivery earned them success nationwide and abroad. Link of them together last year.

Do Not Forsake Me Oh My Darling is a female-fronted duo of drums/vocals and bass. The band name and songs are all inspired by the ‘60s cult spy-fi TV show The Prisoner. They’re loud, arty, minimalist rock working in the realm of proto-punk/new wave/no wave bands and dark songwriters like Joy Division, Einsturzende Neubauten, The Velvet Underground, Sonic Youth, Diamanda Galás, Nina Hagen, Teenage Jesus and the Jerks, Nick Cave and the Bad Seeds, PJ Harvey, and Leonard Cohen.

Lesley Ellis Children’s Chorus is a group of 3rd, 4th and 5th graders from Lesley Ellis School (in Arlington) who love to sing. In a similar spirit to that of the fabulous PS22 chorus, these kids and their teachers (including Guy Mendilow, who has his own impressive credentials as a world music artist) will perform a mix of traditional and contemporary rock/pop/post-punk songs (like “Under the Milky Way” by The Church). These kids really feel it!

Brett is one of the greatest rock writers to come out of Boston, or anywhere. He is a rock lover, book writer (The Sound of Our Town; A History of Boston Rock and Roll), rock critic, and man about town. 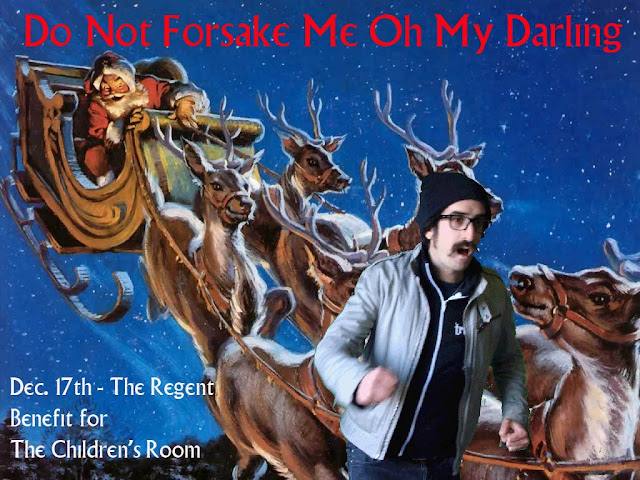